Maritime transport, an important pillar of the blue economy, plays a key role in the world economy and has a crucial contribution to decarbonisation, an analysis by the European Parliament indicates.

To take into account: the blue economy includes all those activities that are based on the sea or are related to the sea.

Due to the expected growth of the global economy and the associated transport demand from global trade, greenhouse gas emissions from shipping could grow by 50-250% by 2050 if no action is taken, so it is critical that the industry continue to improve the energy efficiency of ships and switch to alternative fuels.

Most of the goods transported within and outside the European Union are shipped by sea.

In addition, almost 420 million passengers on board cruise ships and ferries embarked and disembarked in European Union ports in 2019, this is 1.8% more than the previous year. 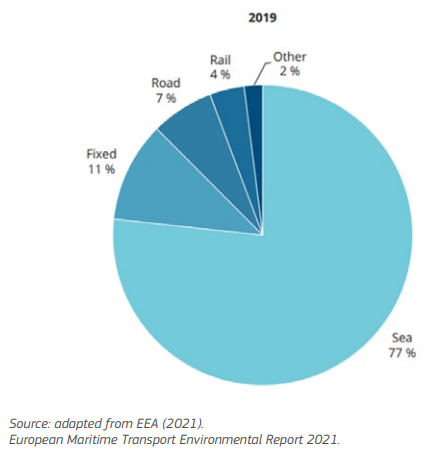 Globally, shipping is the most carbon efficient mode of transport, in terms of emissions by distance and weight transported.

In addition, European ports provide new handling equipment and technology required by the growing offshore energy industry and are developing as hubs for sustainable energy.

Therefore, the analysis highlights that ports have become an important and growing sector of the blue economy and play a crucial role in the implementation of the Fit for 55 package, a set of legislative proposals presented in July 2021 to align European Union legislation with the goal of reducing net greenhouse gas emissions by at least 55% by 2030.

This covers the proposed FuelEU maritime regulation, which aims to boost the production and consumption of low-carbon, sustainable fuels in shipping, and obliges ships to use the electricity supply on land (also known as “onshore power supply”, PAHO). The European Parliament expects ports to provide both.

It requires that, by the beginning of 2030, at least 90% of the demand for OPS in the seaports of the trans-European transport network (TEN-T) be satisfied.

In addition, the European shipbuilding and ship repair sector, another important traditional sector of the blue economy, is fully active in cleaner shipping. This includes the manufacture of equipment and machines.