Walmart de México y Centroamérica grew in 2021 for the eighth consecutive year above the self-service and club market, measured by the National Association of Self-Service and Department Stores (ANTAD).

The results of its formats have been consistent from period to period and growth this year was led by Sam’s Club, followed by its Bodega and Supercenter formats.

Walmart de México y Centroamérica advanced in 2021 in the migration of its Superama format to Walmart Express, seeking to satisfy the need of its customers to have a fast and comfortable shopping experience, with reduced prices on basic items. 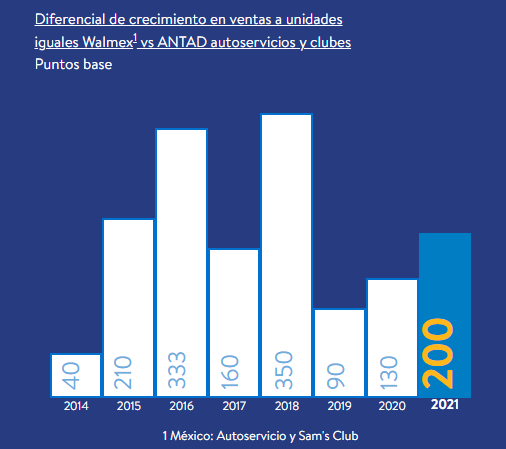 The transition process was challenging though: The shopping experience is not ideal when remodeling is going on, and this resulted in more subdued sales.

Likewise, after a strong growth registered last year in the sales of its electronic commerce, it was difficult for the company to propose a comparison that would allow defining the behavior of its clients for this year.

Walmart de México y Centroamérica is one of the most important retail chains in the region. At the end of 2021, it operated 3,620 units in six countries (Costa Rica, Guatemala, Honduras, El Salvador, Mexico, and Nicaragua), through self-service stores, membership price clubs, and omnichannel sales.

In Mexico, the company had a good performance in same store sales. The North, South and Center regions led the growth. For their part, all merchandise divisions grew, mainly Clothing and Footwear, which reversed its trend compared to the previous year, followed in performance by General Merchandise, and Groceries and Consumables.

Also in Mexico, general expenses increased 6.8% compared to the previous year, mainly due to strategic investments such as remodeling, new stores, strengthening of the omnichannel strategy, talent, logistics and technology, among others.

The results of the year were positive, operating income grew 10.9%, which represented 9.1% of total revenues. EBITDA operating flow increased 9.6%, resulting in 11.4% of revenues.

In Central America, the company’s total revenues reached 126,820 million pesos, a growth of 8.1% compared to the previous year.