Grupo Aeroportuario del Pacífico (GAP) reported that 50.0 and 52.5% of the sum of total revenues for the years 2020 and 2021, respectively, come mainly from the TUA that passengers pay when using airport facilities.

Without considering the TUA income that the airlines collect on behalf of the GAP, no customer represents more than 10% of the total income of this company.

As a result, the TUA is automatically included in the cost of the airline ticket for the passenger and GAP issues invoices to each airline for these charges. 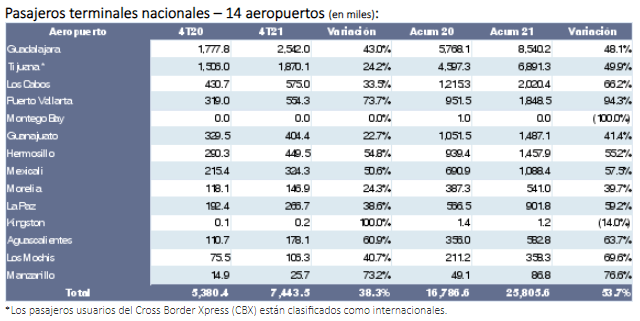 GAP and the airlines with whom it establishes the agreements have the right to terminate the contractual relationship regarding the collection of the TUA by means of a notice to the other party.

In the event that GAP or one of the airlines decides to stop collecting the TUA on behalf of GAP, it will be necessary to implement a system of direct collection of TUA from departing passengers.

The operation of GAP’s airports, as well as most airports, has a strong dependence on services provided by third parties, such as air traffic control authorities, airlines and ground transportation providers.

GAP also relies on the government or government entities to provide services such as electricity supply, aircraft fuel supply, air traffic control, and immigration and customs services to international passengers.

In addition, the stoppage of ground transportation such as taxis and the bus service of one or more of GAP’s airports could also affect the operations of the company’s airports.