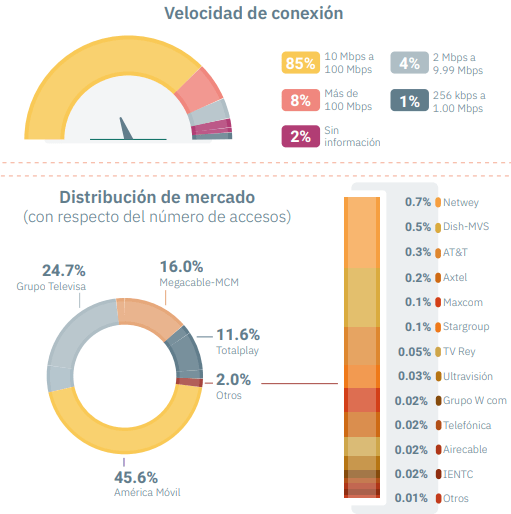 At the end of last year, in Mexico there were 19 million 354,980 fixed internet service accesses.

Total Play and the market

América Móvil, the leader of this business, decreased its market share from 50.1 to 45.6%, comparing the same year-end, while Megacable-MCM remained the same, with 16 percent.

This is due to the fact that these concessionaires have less than 200,000 accesses to the fixed Internet service and are not obliged to report such information for the referred periods.

Additionally, the telecommunications and entertainment industries in which Televisa operates are changing rapidly as a result of new entrants and the evolution of distribution technologies, including the internet.

Likewise, most cable operators are authorized by the Mexican government to provide pay television services, broadband internet and voice services, including Voice over Internet Protocol or “VoIP” services.

Companies also face competition from the dominant economic agent in telecommunications, particularly in the provision of data and fixed telephony services.