Mexico City, Nuevo León, Jalisco, Chihuahua and Guanajuato were ranked as the top states that attracted the most Foreign Direct Investment (FDI) from January to September 2022 in Mexico. 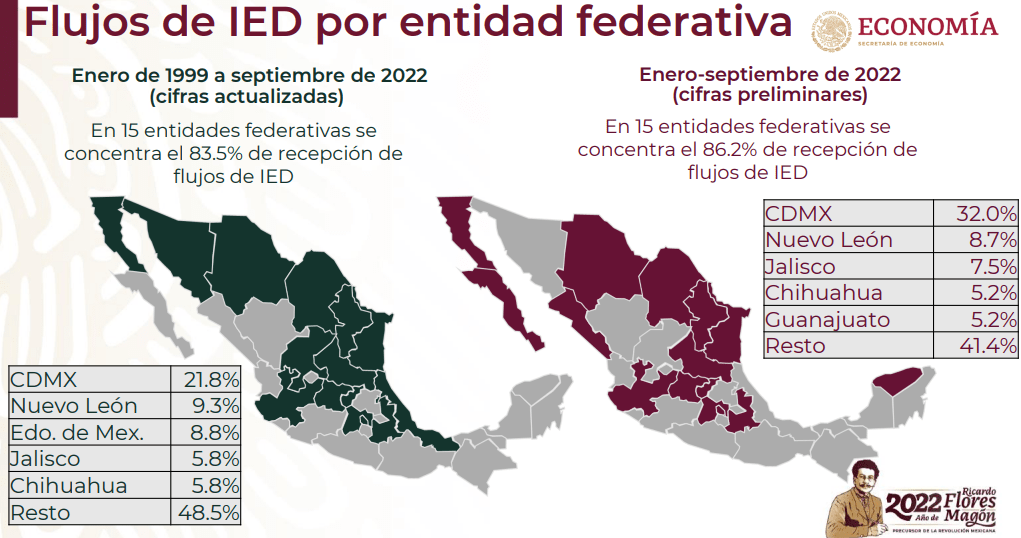 In the first nine months of the current year, Mexico captured 32,147.4 million dollars of FDI, 29.5% more, at an inter-annual rate.

According to the Organization for Economic Co-operation and Development (OECD), FDI is a category of cross-border investment in which an investor resident in one economy establishes a lasting interest and a significant degree of influence over a company resident in another economy.

In general, FDI is an important channel for technology transfer between countries, promotes international trade through access to foreign markets and can be an important vehicle for economic development.

Some activities in Mexico are reserved to the State and, according to the Constitution, these activities are not considered monopolies (Article 28).

The State is also the owner of salt and mineral deposits, whose exploration and exploitation require a concession.

To obtain a concession, foreigners must establish themselves in Mexico and sign an agreement with the Secretaría de Relaciones Exteriores (SRE) whereby they agree to be considered as nationals and waive the diplomatic protection of their country of origin (“Calvo Clause”); in the event of a dispute with the Mexican State, it can be resolved only in Mexican courts.

However, while domestic land transportation services are reserved to Mexicans, foreigners may provide courier and parcel services.

In principle, foreigners do not require prior authorization to invest.