Johnson & Johnson, Roche and Novartis ranked among the world’s leading pharmaceutical companies in 2020, according to a report by ECLAC.

In the last four years, the world sales of the 20 main transnational pharmaceutical companies reached an average of 662.591 million dollars, of which more than 70% corresponded to medicines. 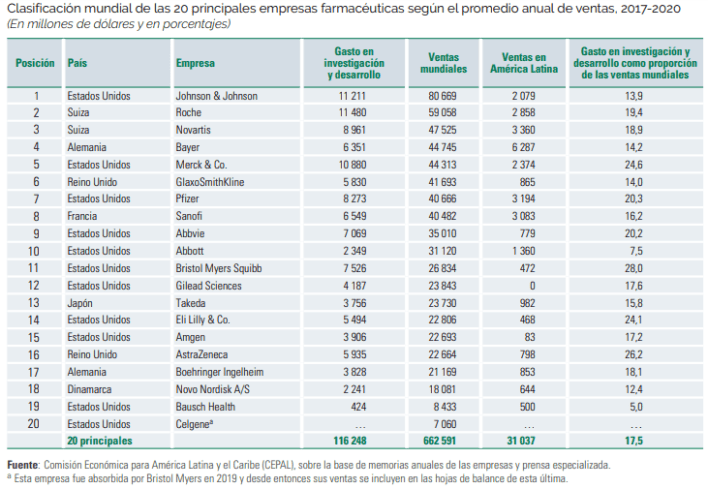 But the sector’s sales appear highly concentrated in a few countries, all of them developed.

Also in the ranking, companies based in the United States stand out, a country that accounted for more than 50% of the sales of the top 20 pharmaceutical companies, followed by Switzerland, Germany and the United Kingdom.

According to ECLAC, the concentration of sales by pharmaceutical companies is high and has increased in recent years.

In 2020, the top 20 companies accounted for 42% of global pharmaceutical GDP.

La Cerpal estimates that in the period 2017-2020 the amount of capital allocated to the five most important mergers and acquisitions in the sector in the world exceeded 260,000 million dollars, which represents almost 40% of the average sales of the 20 largest companies in the same period.

A salient feature of the sector is the high spending on research and development, which averaged 17.5% of the total sales of the top 20 companies in the aforementioned period.

With the arrival of the pandemic, merger and acquisition operations were reduced and ventures aimed at the development of vaccines and medical treatments increased.

The development processes of new drugs are complex, and the entry of the latter to the market usually takes between 8 and 15 years.

Following the outbreak of the current pandemic, many laboratories have accelerated their vaccine development processes, posing renewed challenges for regulatory authorities who must monitor progress and grant authorizations for use and marketing.

Global production of the pharmaceutical sector reached $ 1.65 trillion in 2017, equivalent to 1% of world GDP and 3.1% of world manufacturing GDP. It is estimated that that same year the sector’s contribution to world value added was $ 532 billion.