Shanghai, Singapore and Ningbo-Zhoushan were the world’s top container ports in 2020 and 2021, according to the United Nations Conference on Trade and Development (UNCTAD).

Asia continued to play a leading role, with ports in the region accounting for 62.5% of global container port traffic.

Nine of the world’s top 10 ports by throughput were in Asia, led by Shanghai, Singapore and Ningbo-Zhoushan. 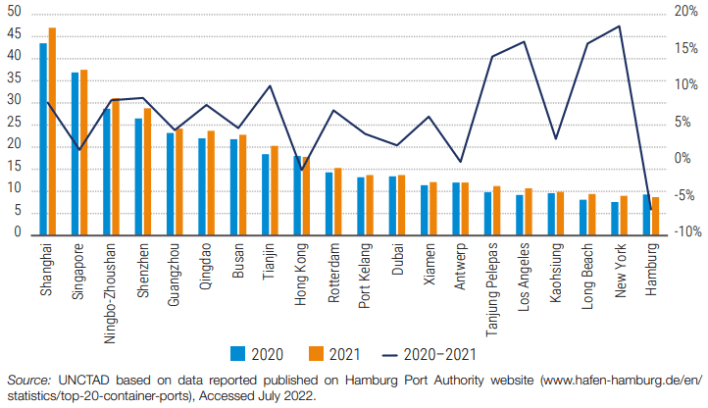 Meanwhile, in Rotterdam, volumes increased 7.7 percent, but in Antwerp volume growth was flat, as terminals had to deal with schedule disruption.

In Africa, ports recorded firm growth of 9.5 percent, while in Australia and New Zealand growth was equally solid at 7.7 percent.

Cargo handling at container ports in Latin America and the Caribbean increased 10.5 percent.

In line with seaborne trade, port calls rebounded in 2021 amid unparalleled port congestion, with hot spots concentrated in the United States, Europe and China.

In northern Europe, some shipping operators, in search of greater efficiency, reduced the number of calls per rotation.

This raised the volume of cargo interchange per call, while extending terminal working time and putting pressure on major ports.

The effects of congestion and bottlenecks spread to a range of sectors, including automotive manufacturing, healthcare and electronics, and in particular to a severe shortage of semiconductors.

Since the onset of the logistics disruptions in the late 2020s, there has been a global decline in liner shipping connectivity, albeit with variations between countries.

The world’s most connected country remained China, which extended its lead. And India expanded its regional connections by improving port capacity.

Similarly, in North Africa, the continued development of port infrastructure helped mitigate the impact of the pandemic.