With this, this sector had the highest dynamism among the first concepts in which Mexican foreign sales are divided. 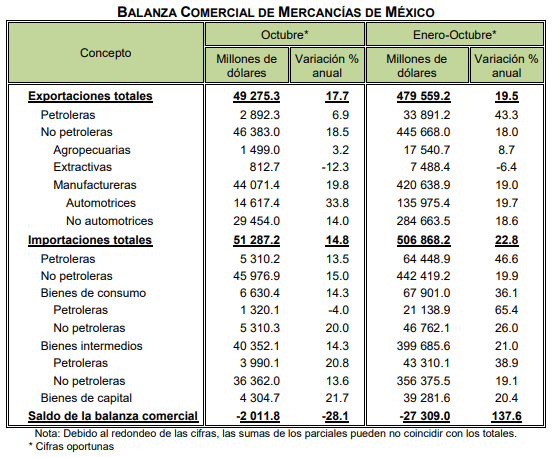 In general and during 2021, the main manufactured export products continued to be machinery and electrical appliances, and transportation material, which comprised 58.8% of total exports.

Last October, total exports of products from Mexico were 49,275.3 million dollars, an increase of 17.7%, at annual rate.

Mexico’s exports are concentrated in the United States and the automotive sector has been one of the most booming.

Within this sector, the specific rules of origin of the Agreement between Mexico, the United States and Canada (T-MEC) are stricter, as the thresholds for conferring origin are higher, particularly in the case of certain sectors such as automobiles, steel and aluminum.

For example, for many automotive products the Regional Value Content (RVC) was increased from 62.5% in the North American Free Trade Agreement (NAFTA) to 75% in the T-MEC.

In addition, in order to obtain origin, automobile producers must use aluminum and steel from the region that account for 70% of the value of purchases, and origin is only conferred if the metal is smelted and cast in the territory of one of the Parties.

Cumulatively, automotive industry exports totaled 135,975.4 million dollars in the first 10 months of the current year, that is 19.7% more than in the same period of 2021, according to Inegi data released this Monday.

With respect to external demand, in the July-September period the average value of manufacturing exports in seasonally adjusted terms continued to increase. This was the result of the advance of both automotive and non-automotive exports.

The structure of the value of merchandise exports during the first ten months of 2022 was as follows: manufactured goods, 87.7 percent; petroleum products, 7.1 percent; agricultural goods, 3.7 percent; and non-petroleum extractive products, 1.5 percent.