Newmont, Industrias Peñoles and Fresnillo operate the main zinc mines in Mexico, according to data from the Mexican Mining Chamber (Camimex) for 2021.

Peñasquito, owned by Newmont and located in the state of Zacatecas, leads the ranking, with 205,480 tons.

This is followed by two Industrias Peñoles mines: Velardeña (Durango and 90,680 tons) and Tizapa (State of Mexico and 40,130 tons). 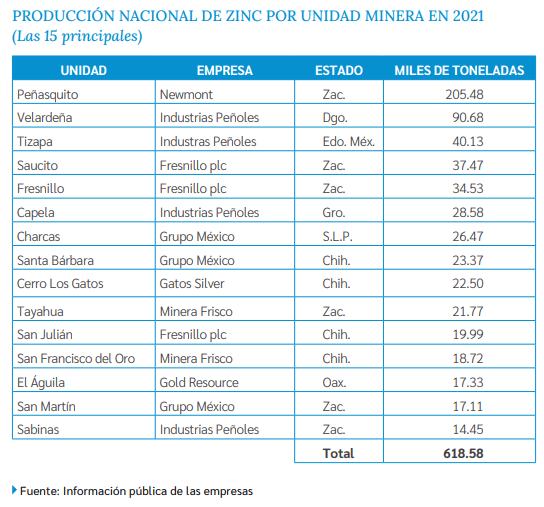 Zinc is the 23rd most abundant element in the earth’s crust.

To take into account: sphalerite, zinc sulfide, is and has been the main mineral in the world. Zinc is necessary for modern life and, in tons produced, it ranks fourth among all metals in world production, being surpassed only by iron, aluminum and copper.

Zinc’s uses range from metal products to rubber and medicines.

Fresnillo plc owns two outstanding zinc mines in Mexico. Both are in the state of Zacatecas: Saucito (37,470 tons) and Fresnillo (34,530 tons).

The Buenavista Zinc project, in Sonora, is located within the Buenavista facilities and includes the development of a new concentrator to produce approximately 100,000 tons of zinc and 20,000 tons of copper per year.

In this regard, Grupo Mexico has completed the engineering study.

To continue with the project, stronger preventive measures have been put in place to combat Covid-19.

Procurement is 96% complete and all major equipment is on site.

In addition, construction work is underway.

While the project has all the necessary permits, the project budget is $413 million and we expect to start operations in 2023.

When completed, Grupo Mexico anticipates that this new facility will double the company’s zinc production capacity and provide 490 direct jobs and 1,470 indirect jobs.