UNCTAD indicated the revenues, profits and volumes of seven of the world’s top container shipping lines in 2021.

Despite higher costs, container carriers made astronomical profits in 2021.

Since the start of the pandemic, container carriers have had to cope with logistical constraints and rising fuel prices, but have benefited from huge increases in freight rates that have boosted their profits.

Overall, in 2021, carriers moved similar volumes to the previous year; however, the industry’s full-year operating profits (earnings before interest and taxes, EBIT) soared to around $240 billion. 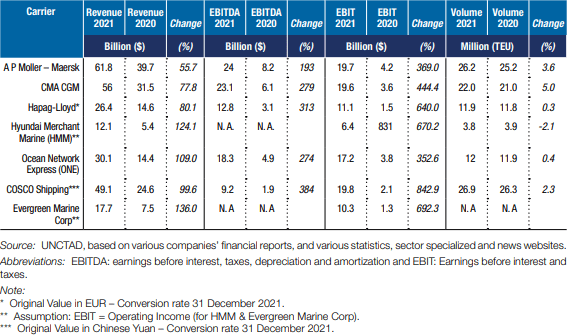 And Singapore-based container carrier Ocean Network Express (ONE) increased its volume by only 0.4%, but doubled its revenue to $30 billion and boosted its profit from $3.8 billion to $17.2 billion.

As the current supply chain crisis eases, with freight rates declining and port performance improving, UNCTAD believes that the actions needed to prepare for the long-term development of the sector should not be lost sight of.

Among other aspects, a transparent multilateral framework for the decarbonization of shipping is needed to reduce uncertainty for both policymakers and industry.

The concerns of developing countries, especially the most vulnerable economies, including the least developed countries and small island states, must also be taken into account.