According to the Mexican Geological Service (SGM), pure silver is a shiny, resistant, ductile and malleable metal. Of all metals, it has the highest reflective optical white color and the highest thermal and electrical conductivity, and has a metallic white luster that is susceptible to polishing.

Chemically, it is one of the heavy and noble metals; commercially, it is a precious metal. 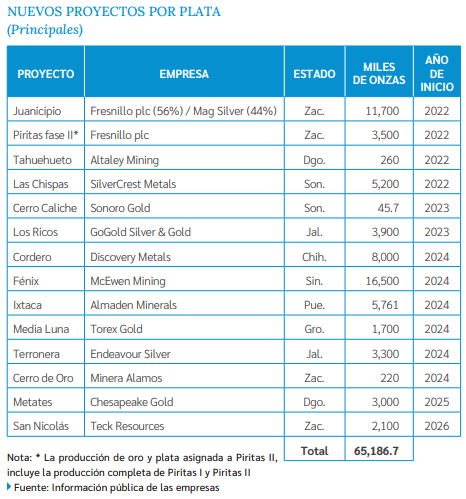 In Zacatecas, the “Juanicipio” project, owned by Fresnillo plc and MAG Silver, presented a delay, although the construction of the plant was completed in the fourth quarter of 2021; however, the Federal Electricity Commission (CFE) did not grant the permits to connect to the power grid and, as a result, the mill’s start-up schedule was extended by approximately six months to comply with the new requirements of the National Energy Control Center (Cenace).

Another Fresnillo plc project that had delays due to electrical connection permits that affected the start-up of the plant was “Piritas phase II”, extending six months longer than planned.

Expected production is 13,000 ounces of gold and 3.5 million ounces of silver per year.

Meanwhile, Sonoro Gold, owner of the “Cerro Caliche” project in Sonora, indicated that in the fourth quarter of 2021 it concluded the preliminary economic evaluation, as well as the preliminary engineering design and environmental studies.

The mine will have a useful life of seven years, with a capacity of 15,000 tons per day producing a total of 323,500 ounces of gold equivalent. The initial investment is US$32.2 million. A schedule for the construction of the project is in place for 2022. Operations are expected to start in the first quarter of 2023.

At the end of November 2021, Discovery Silver announced the results of the preliminary economic assessment of its “Cordero” silver project, located in Chihuahua.

The mine life will be 16 years, with an average annual production of 26 million silver equivalent ounces and a development investment of US$368 million.

Endeavour Silver continues to develop its “Terronera” subway project in Jalisco, with the preparation work for access to the mine scheduled to begin in 2022.

Mill start-up is expected in the fourth quarter of 2023. Total production of 1,700 tons per day will be achieved by January 2024.

Minera Alamos informed that its project in Zacatecas “Cerro de Oro” will start the permits for the construction of the mine that could start in the first semester of 2023 in a period of 5 to 6 months.