Although gold prices closed 2021 at lower levels than those observed at the beginning of the year, the average quotation of 1,799 dollars per ounce was 2% higher than that corresponding to 2020, despite the fact that supply exceeded manufacturing demand, due to the fact that surpluses were absorbed with problems by investors. 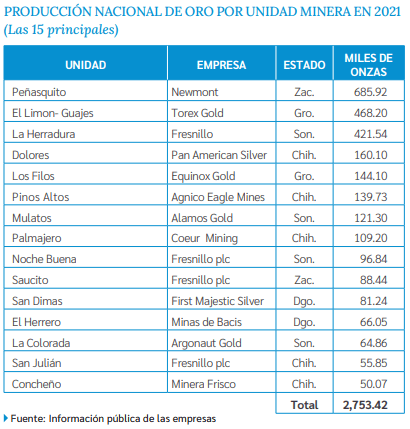 Mexico is the world’s leading producer of silver; the second of fluorspar; the third of sodium sulfate and wollastonite; the fifth of celestite; the fifth of lead, molybdenum, barite, diatomite and magnesium sulfate; the sixth of zinc; and the eighth of gold, cadmium, salt, feldspar and gypsum.

According to Camimex, the relevant events that caused gold production during 2021 to rise in Mexico were:

Other mines that added volume to national production were “Noche Buena”, of Fresnillo plc, and “La Caridad”, of Grupo Mexico, with 10 and 19.3%, respectively.

For its part, Golden Minerals put into operation its open pit mine, “Rodeo”, located in Durango; while “Guanaceví”, of Endeavour Silver, produced 13,317 ounces in 2021, and First Majestic Silver, with its “San Dimás” mine, increased its production 13.5 percent.

Other mines also increased their volumes, such as: “El Herrero” from Minas de Bacis; “Avino”, from Avino Silver & Gold; “Topia”, from Great Panther and “El Castillo”, from Argonaut Gold and “Velardeña” from Industrias Peñoles.

In Chihuahua, Panamerican Silver registered record gold production at the “Dolores” mine, 63.4%, while Sierra Metals’ “Bolivar” more than doubled its volumes compared to 2020.