The International Telecommunication Union (ITU) outlined the trajectory of the growth of the Internet in the world from 1994 to 2021.

Founded in 1865, ITU is the United Nations specialized agency for information and communication technologies (ICT).

First of all, the World Wide Web was invented in 1989 and the Internet is a relatively young technology.

In 1994, approximately 20 million people surfed the Internet, less than half a percent of the world’s population.

Afterwards, penetration grew at double-digit rates until 2010, when it reached a penetration rate of 29 percent.

The growth of the Internet continued gradually until the effects of the Covid-19 pandemic caused an increase in Internet use and, in 2020, approximately 466 million people started using the Internet for the first time, an increase of 10.3% in the penetration.

So this has been the path of growth in the number of people using the Internet since 1994, the year the ITU’s first World Telecommunication Development Conference (WTDC) was held. 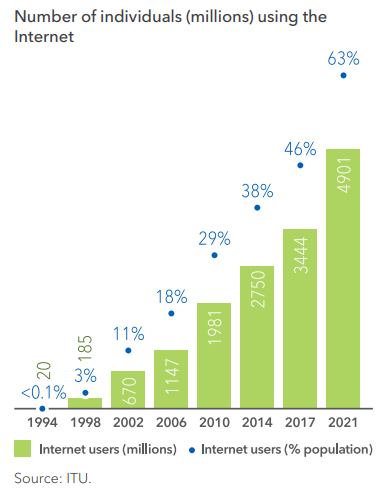 Global usage rates hide disparities between regions. Europe, the Commonwealth of Independent States (CIS), and the Americas are close to reaching 95% usage.

Also the Arab States and Asia-Pacific are on a clear path towards universal use.

Growth of the Internet

These low rates are well below Target 9.c of the Sustainable Development Goals which called for significantly increased access to information and communication technologies and universal and affordable internet access in least developed countries by 2020.

Countries that are late adopters of a technology are often expected to catch up by taking advantage of newer technologies, however this is not always the case.

ITU analysis shows that the countries that were the first to reach 10% internet usage in the 1990s grew at a faster rate on average than in subsequent decades.

By contrast, Internet use in countries that reached this level in the 2010s grew at a much slower rate.

This highlights the challenges related to lack of resources in these less wealthy late adopter countries.