The International Monetary Fund (IMF) provided a brief analysis of the cost of disinflation in the world as part of its latest economic outlook.

However, the IMF indicates that it is difficult to determine the exact degree of policy tightening needed to reduce inflation without inducing a recession.

A number of factors have affected the economic cost of past disinflation episodes, including the initial level of inflation and inflation expectations, wage and price rigidities, the degree to which prices and wages respond to a fall in demand, and the stance of fiscal policy. 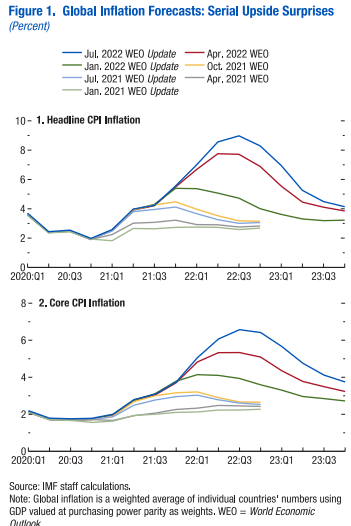 If the evolution of these factors surprises policymakers, or if they get the policy stance wrong -including the level of neutral interest rates- the next disinflationary adjustment could, the IMF warns, be more disruptive than expected.

Previous episodes of disinflation associated with monetary policy tightening, such as those experienced by advanced economies in the early 1980s, were often costly, with high unemployment as the price of taming inflation.

This time around, lower initial inflation, lower and better anchored inflation expectations, and more flexible labor and product markets in advanced economies suggest that costs may be lower.

However, higher sovereign and corporate debt leverage may amplify the effects of policy tightening and influence the willingness of central banks to act decisively on inflation, with potentially higher output costs over the medium term if inflation expectations rise significantly, leading to sharper interest rate hikes.

From the International Monetary Fund’s perspective, the risk of recession is particularly prominent in 2023, when in several economies growth is expected to bottom out, household savings accumulated during the pandemic will have declined, and even small shocks could cause economies to stagnate.

For example, according to the latest forecasts, the United States will have real GDP growth of only 0.6% in the fourth quarter of 2023 on a year-on-year basis, making it increasingly difficult to avoid a recession.

Indeed, the tightening of financial conditions is already contributing to a divergence of lending rates and concerns about the risk of “financial fragmentation” in the euro area, which could impair monetary policy transmission.