Texas and Mexico share a 1,254-mile border with 28 vehicular border crossings and six rail crossings that allow for vehicular, pedestrian and rail traffic.

Of the 28 border crossings, 15 serve both commercial and passenger vehicles, according to the North American Development Bank (NADBank).

Nearly all of the border crossings on the Texas-Mexico border are toll bridges. 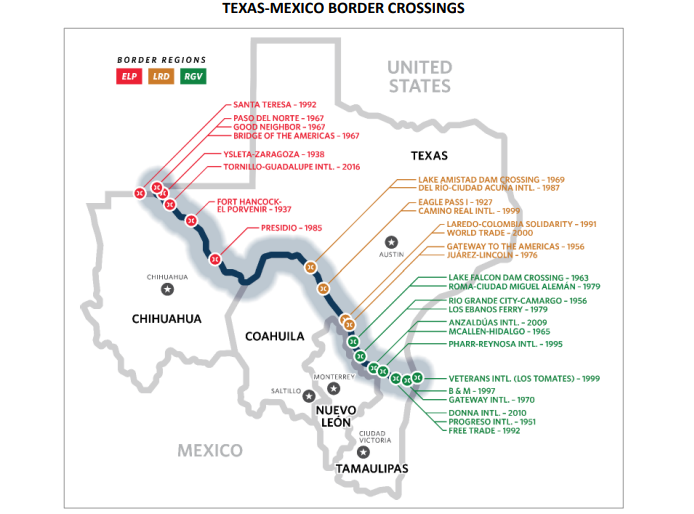 Along with Canada and China, Mexico is a major trading partner of both the United States and Texas.

In bilateral merchandise trade, Texas exports to Mexico totaled $123.104 billion in 2021, while in the opposite direction sales were $108.289 billion, according to Department of Commerce (USDOC) data.

The continued growth of trade along the Texas-Mexico border underscores the importance of border crossings in this region.

Land ports of entry (LPOE) that allow commercial vehicle traffic are key to the Texas economy.

By far, cross-border movement of goods by commercial vehicles is the dominant mode of transportation for both exports and imports in the three Texas border crossing regions.

Also known as a border station, an LPOE is the facility that allows the controlled entry or exit of people and materials from the United States and consists of the land, buildings, site roads, and parking lots occupied by the LPOE.

An LPOE houses U.S. Customs and Border Protection (CBP) and other federal inspection agencies responsible for the enforcement of federal laws relating to such activities.

Due to the continued growth of trade in the Texas-Mexico border region, there is significant interest in increasing the number of border crossings and their processing capacity.

In 2018, nearly 4.4 million northbound truck crossings were recorded from Mexico into Texas, 34.5% more than the number recorded in 2008.

The latter two are located in the Lower Rio Grande Valley region and are currently in the process of expanding their facilities to accommodate loaded commercial vehicle crossings.