Arca Continental reported a 5.5% year-over-year increase in sales volume in the carbonated soft drinks category in Mexico in the third quarter of 2022.

In particular, colas had a 5.5% increase in volume, mainly due to the performance of Coca-Cola Sin Azúcar, which continues with a double-digit growth trend driven by the increase in its coverage in the traditional channel, reaching 91 percent. 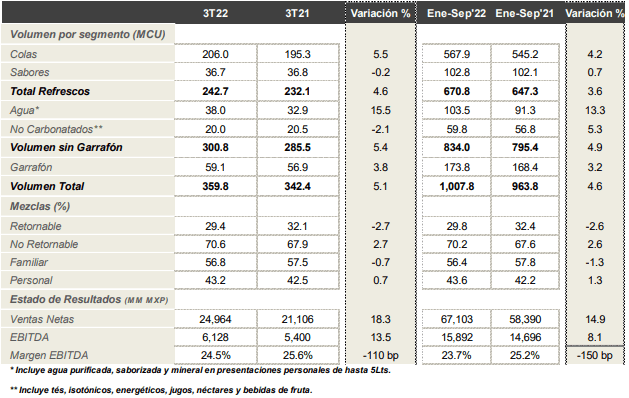 Overall, the company’s net sales for the Mexico region reached Ps. 24.964 billion in the third quarter, an increase of 18.3% compared to the same period last year.

At the channel level, all channels showed volume increases, where the traditional channel has grown consistently, the modern channel and on-premise posted double-digit increases, with solid growth in supermarkets, due to excellent results in the purified water category, continued growth in affordable packaging, and the successful execution of promotional activity.

During the quarter, Arca Continental’s strategy and efforts were focused on providing affordability to consumers and capturing new consumption occasions with a differentiated portfolio.

According to the company, its strategy allowed it to maintain affordable prices within its product portfolio, with presentations such as 250 ml and returnable packaging.

At the same time, the expansion of the CA Digital platform continued to accelerate.

In the third quarter, the company had 180,000 active customers, which represents a 23% growth compared to the previous quarter.

At the end of the quarter, close to 25% of the volume was captured through this platform.

Arca Continental believes that the universal bottle strategic initiative continues to be a growth driver as it continues to expand into more territories.

In the quarter, the company launched reformulations and new flavors of Topo Chico Hard Seltzer.

During the quarter Arca Continental began promotional activities for the FIFA World Cup, with campaigns where consumers can win trips to Qatar through the use of codes found in personal presentations of Coca-Cola and Coca-Cola Sin Azúcar.

At the end of the initiative, more than 400,000 codes were registered nationwide, 37% of which corresponded to Arca Continental.

On the other hand, Bokados in Mexico had double-digit growth in sales and EBITDA, mainly driven by the pricing strategy executed during the quarter, as well as growth in the traditional and modern channels.