The global semiconductor shortage was exacerbated by Russia‘s invasion of Ukraine (a major producer of neon gas), according to a U.S. Federal Reserve report.

The prices of several raw materials that are vital to some manufacturing industries soared in the first days of the conflict, such as neon gas (an input for the production of semiconductor chips), palladium (an input for semiconductors and catalytic converters), nickel (an input for electric vehicle batteries) and platinum. Ukraine supplies 50% of the world’s refined neon.

Still, there have been increases in U.S. production of motor vehicles, while semiconductor supply has recovered somewhat. 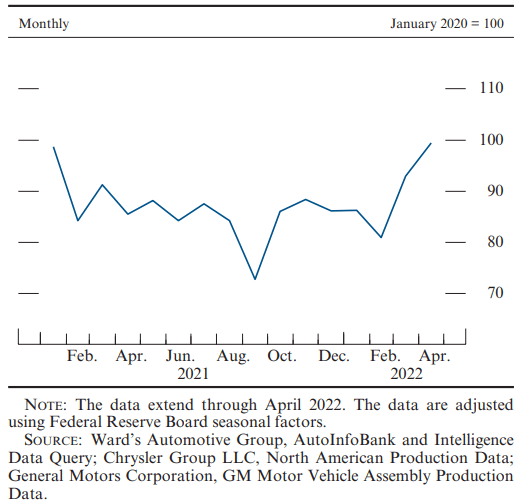 In addition, according to the Federal Reserve, survey results suggest that supplier lead times are shorter and order books are smaller than they were at the end of 2021.

In the United States, supply chain bottlenecks remain a major impediment to domestic and foreign companies. Although U.S. manufacturers have been posting solid production growth for more than a year, order backlogs and lead times remain high, and output prices have risen rapidly.

There are other risks to global supply chains. In China, shutdowns due to Covid-19 led to the largest monthly declines in industrial production since the early 2020s, while disrupting domestic and international freight transportation.

Also, the war in Ukraine continues to put upward pressure on energy and food prices and has increased the risk of input supply disruptions to some manufacturing industries.

Global production and transportation bottlenecks continue to be a major impediment to domestic and foreign companies.

Russia’s invasion of Ukraine and widespread Covid-19 blockades in China have exacerbated tensions in global supply networks and led to increased uncertainty about when supply conditions will improve.

Despite this turbulence in the global supply network, U.S. manufacturers have been posting solid production growth for more than a year.