Canada and Brazil led the ranking of the main countries with renewable energy in the world during 2019, according to the International Energy Agency (IEA).

At the national level, the share of renewable sources in energy consumption varies widely depending on the availability of resources, the consistency and effectiveness of regulatory frameworks, financing mechanisms, policy support, the impact of energy efficiency and consumption patterns in total energy demand.

Among the top 20 energy-consuming countries, Brazil and Canada had the highest shares of modern renewables in their energy mix in 2019, due to heavy reliance on hydropower for electricity and bioenergy for heat and transportation. 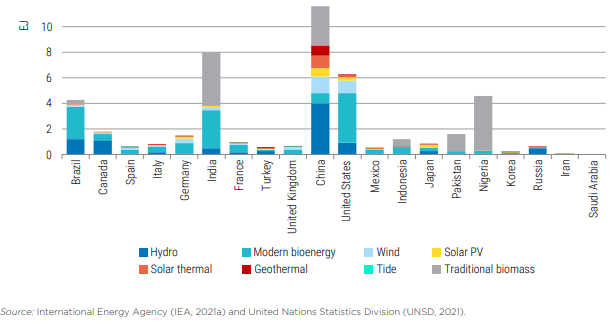 Germany, Italy and the UK made the biggest gains in the share of modern renewables in their TFEC between 2000 and 2019, mainly through the deployment of bioenergy (particularly for heat), wind and solar PV, and thanks to the stabilization or decrease of your TFEC.

Reductions in total energy demand played a key role in the latter two countries, along with the rapid adoption of wind power, bioenergy for heat (Germany), and biofuels (UK).

The analysis, published by the IEA, the World Bank, the United Nations, IRENA and the World Health Organization, covers renewable energy deployments over the past two years, as the global economy was first hit by Covid-19 and then started to recover.