The three-month moving average of real remittances to Mexico decreased for the third consecutive month in March, falling 2.4% from February.

Month over month and without adjusting for seasonality, remittances fell 4.2 percent.

From the perspective of the Federal Reserve Bank of Dallas, remittance flows to Mexico are most likely slowing due to high inflation in the United States and elsewhere, eroding disposable income, including funds for the remittances. 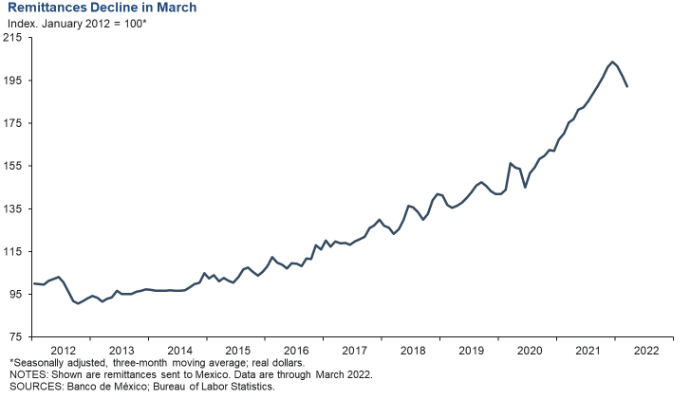 Remittances to Mexico peaked in November 2021. The depreciation of the peso between February and April 2020 contributed to record transfers of $50 billion in 2021, as did Mexican migrants abroad who sent more money to help their relatives to buy food or cover basic expenses during the pandemic.

Mexico’s GDP grew 3.6% annualized in the first quarter of 2022, an increase from dismal 0.1% growth in the fourth quarter.

However, first-quarter GDP growth was below analysts’ expectations of 4.6 percent.

The consensus forecast for GDP growth for 2022, prepared by the Bank of Mexico, fell again in April to 2.1 percent (Q4/Q4).

Meanwhile, inflation increased further as a result of price pressures associated with energy and commodities.

The latest available data shows that industrial production, exports, retail sales and employment grew, while remittances fell. In April, the peso gained value against the dollar, but inflation remained high.

Month over month and unsmoothed, the industrial production index rose 0.4% in March.