The Mexican federal government has increased the use of direct awarding as a criterion for awarding contracts in public bids, by amount contracted, according to information from the World Trade Organization (WTO). 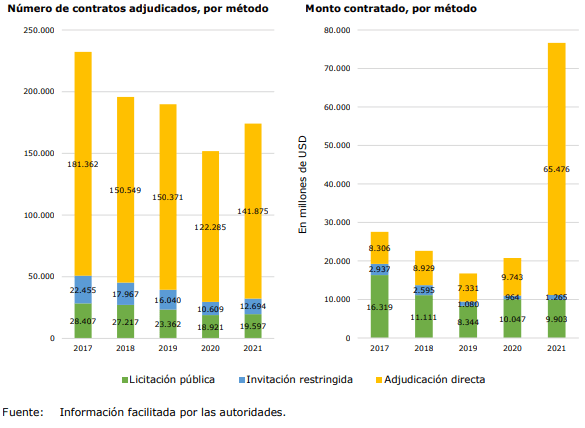 Under the cost-benefit and scoring criteria, the lowest price is not necessarily decisive.

The lowest price criterion is used if the other two criteria cannot be used.

Moreover, all other things being equal, preference is given to MSMEs.

In general, works contracts are awarded to the most “solvent” offer, i.e., the conditions offered by the supplier guarantee the execution of the contract.

All things being equal, in open international public bidding processes for the acquisition of goods, preference is given to goods of national origin.

In addition, a margin of preference of 15% continues to be given to goods of national origin.

Through restricted bidding, a minimum of three pre-selected suppliers are invited to submit bids.

The same criteria are used to award the contract as in the case of public bidding.

In direct award, the contract is awarded to a pre-selected supplier.

The authorities indicated that in both cases, suppliers are pre-selected by means of a market study that takes into account, among others, the technical and financial resources of the candidates.

Procurement procedures may be carried out in person, electronically through the CompraNet platform or in a mixed manner. According to the authorities, in 2020 70% were carried out on CompraNet, 18% in person and 12% in mixed form.

In 2019, the Federal Government Digital Store (TDGF) was created on the CompraNet platform to carry out purchases of goods and services subject to framework contracts.

This increase is due to the purchase of medicines, medical materials/equipment and hygienic products due to the health emergency.

Between 2017 and 2021, direct award was the method by which the largest number of contracts were awarded.

In terms of value, the majority of purchases are still awarded through public tenders, although there has been an increase in the use of direct award.

In 2021, 85% of public procurement was carried out through direct awards.

This is because, in the context of the pandemic, the federal government authorized the use of this method for the purchase of medicines, medical materials/equipment and hygiene products.