The pandemic boosted demand for multinational pharmaceutical products and health care services, leading to a 15% revenue increase in the health sector, especially in foreign markets (18%) in 2021, indicated a report of the United Nations Conference on Trade and Development (UNCTAD).

At the same time, the search for smaller successful companies to help develop new products led to numerous international acquisitions and an average 20% increase in foreign assets for pharmaceutical multinationals.

The largest of those deals was Novartis (Switzerland)’s acquisition of The Medicines (United States) for $7.4 billion.

Internationalization statistics of the 100 largest non-financial MNEs, worldwide and from developing and transition economies

(Billions of dollars, thousands of employees and per cent) 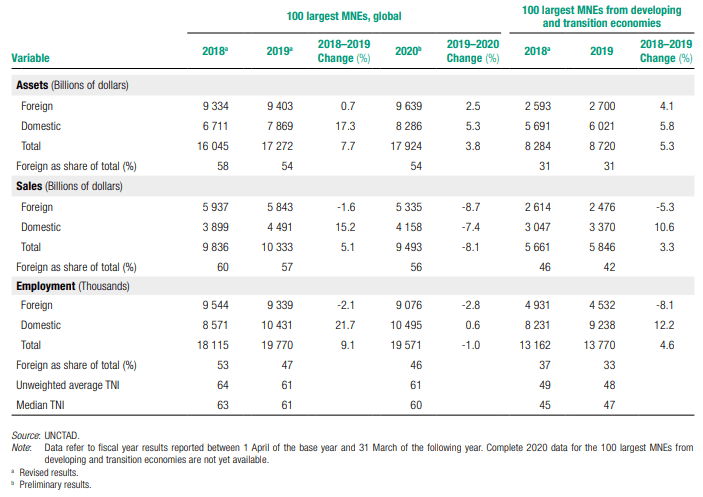 In contrast, hit by the drop in oil prices at the beginning of the year, sales of multinational oil and gas companies fell by 30 percent.

The UNCTAD report adds that this led to a paralysis of foreign investments and, in some cases, to asset restructuring and divestment programs, which led to a smaller foreign presence.

For example, Royal Dutch Shell (Netherlands–UK) shed around 15% of foreign assets during 2020, and Equinor (Norway) and BP (UK) around 10%.

ExxonMobil (United States) expects to generate $15 billion from divestments in 2021 (mostly overseas) and up to $25 billion by 2025.

Major multinational energy companies such as TC Energy (Canada) and Repsol (Spain) scaled back their overseas operations and production as they slipped out of the top 100 rankings.

Overall, the internationalization levels of the top 100 MNCs stagnated in 2020.

Others, including the products of pharmaceutical and telecommunications companies, expanded their international operations.

Publicidad
Tags
especially in foreign markets (18%) in 2021 it said. a report of the United Nations Conference on Trade and Development (UNCTAD). leading to a 15% revenue increase in the health sector The pandemic boosted demand for multinational pharmaceutical products and health care services
Redacción Opportimes Send an email Make 3 semanas
Mostrar más