To know the product: caustic soda, which has the commercial name of sodium hydroxide (NaOH), is widely used in the alumina, soap, detergent and chemical industries in general.

Orbia has plants for the Salt-Chloro-Soda process in Mexico where chlorine, caustic soda, salt, hydrochloric acid and sodium hypochlorite are produced. 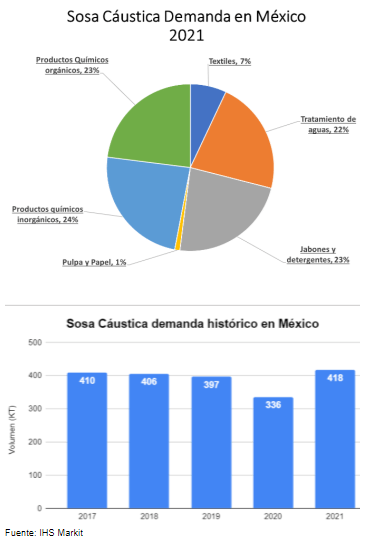 At the same time, it produces sodium hypochlorite in Colombia and mainly chlorine, caustic soda and VCM in Germany.

In addition, the company has plants that produce industrial and food phosphates.

On the other hand, in a joint 50/50 investment with Oxychem, Orbia produces ethylene in a cracker located in Ingleside, Texas, United States.

In addition, caustic soda has multiple applications, including the production of oils, soaps and detergents, regeneration of ion exchange resins for water treatment, washing of glass bottles, bleaching of cellulose in the pulp and paper industry, production of refined sugar, dyeing of cotton fabrics, production of agrochemicals, manufacture of gelatin and jellies, cleaning products in general.

In Mexico, this product has many industrial uses, including organic (23%) and inorganic (24%) chemical products, as well as in the production of soaps and detergents (23 percent).

In the last 20 years there has been a significant change in the use of technologies to produce chlor-alkali.

In Western Europe, chlorinated soda production based on mercury technology was converted to membrane cell technology in 2018.

Some chlorine-soda plants with asbestos-based diaphragm cells are modifying this material with another asbestos-free polymer and their operation is still approved and regulated by their respective governments. Orbia does not use mercury technology in its chlorine processes.