The foregoing overcompensated for the effects of the reduction in volume attributable mainly to a lower production of light vehicles by Nemak’s customers, as a result of the global shortage of semiconductors.

Nemak has significant consumption of aluminum scrap, as well as ingots of this material as the main raw material.

Financial results of the company 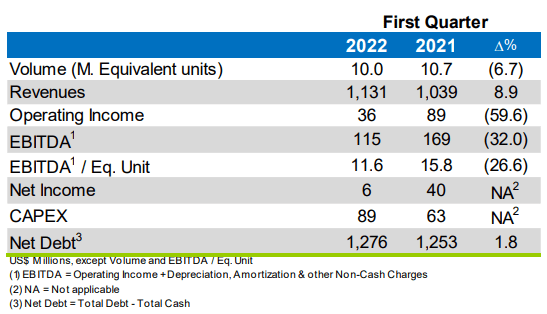 In order to mitigate the risks related to the volatility of the prices of this input, the company has established agreements with its clients, in which the variations in the price of aluminum are transferred to the sale price of the products through a pre-established formula.

However, there is a residual risk due to the fact that each original equipment manufacturer (OEM) uses its own formula to estimate aluminum prices, which normally reflects market prices on the basis of an average period that can vary between one and three months.

In particular, the powertrain parts consist of cylinder heads, engine blocks, and others, as well as transmission parts, such as gearbox, converter box, and others.

While the cylinder heads and engine block form the main structure of the engine, the gearbox forms the outer part for various parts of the transmission system.

Structural and electric vehicle components are elements that make up the structure and chassis of the vehicle, including pillars or posts, suspension towers, door structures, cross members, engine mounts, suspension arms and stringers, among others, as well as parts that protect the batteries and the motors and transmissions of electric cars.

Recently, Nemak has been venturing into the business of structural components and components for electric vehicles.

On February 24, 2022, Nemak announced that it has won new contracts worth $350 million annually to produce battery cases for all-electric vehicles for global customers.

Nemak plans to install three new plants in Europe and North America to respond to the joining and assembly requirements of these products, with a projected total investment of approximately 200 million dollars.