Natural gas prices have varied sharply between regions, with European prices up 350% year-on-year in August, the World Trade Organization (WTO) highlighted in a report released Wednesday.

Meanwhile, U.S. prices rose 120% in the same month, but remained well below European levels ($8.80 per million BTU versus $70 in Europe).

European demand for liquefied natural gas (LNG) to supplement reduced supplies from the Russian Federation has also pushed up energy costs in Asia, where the price of LNG rose 87% in August.

Although gas prices in Europe have moderated recently, falling 34% between August 31 and September 23, they remain high by historical standards.

In general, the Ukrainian crisis has pushed up commodity prices, particularly fuel, food and fertilizers.

The chart below shows global commodity price indices on the left and natural gas prices by region on the right.

The 36% increase in crude oil prices over the same period was small by comparison, but still significant for consumers. 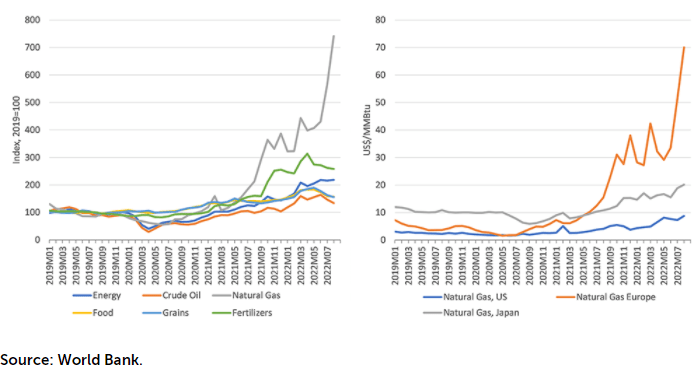 On the other hand, the WTO estimates that world GDP at market exchange rates will increase 2.8 percent in 2022 and 2.3 percent in 2023 (revised down from 3.2 percent).

Trade and output will be weighed down by several related shocks, including the war in Ukraine, high energy prices, inflation and monetary tightening.