The United Nations Conference on Trade and Development (UNCTAD) has issued a report linking inflation, interest rates and public debt.

As a preamble, UNCTAD states that the share of commodities in China‘s and Egypt‘s imports is 38%, and more than 50% of India’s imports are commodities (primary), including food and fuel.

Consequently, rising commodity prices have a strong impact on domestic prices through imports.

Recent estimates covering the last five decades suggest that a 50% increase in oil prices (roughly the increase in 2021) is associated with an increase in inflation of between 3.5 and 4.4 percentage points, with a lag of about two years.

From the UNCTAD angle, these results suggest that in emerging economies, as in advanced economies, a considerable part of the inflation experienced in 2021-2022 has been caused by higher commodity (oil) prices. 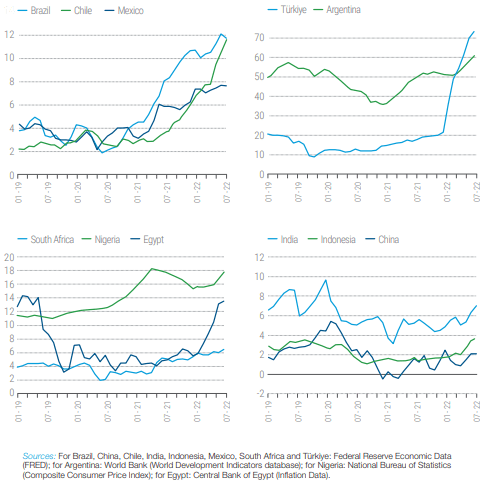 There is one possible silver lining in the last year of high inflation: it has pushed real interest rates, at least for advanced economies, into negative territory.

Thus, if nominal interest rates do not rise too much, the net cost of public debt (the real interest rate minus the GDP growth rate) may remain negative or zero after the disinflation process, thus assuaging concerns about sovereign debt and providing more room for spending plans, including the energy transition.

In 1980, the total debt of emerging market and developing economies (EMDEs) amounted to 65% of their GDP; half of this debt was sovereign debt and half was private sector debt.

When the Federal Reserve (Fed) tightened monetary policy in the late 1970s and early 1980s in response to rising inflationary pressures in the United States, it triggered the “Third World” debt crisis.

Today, many emerging economies are facing even tighter financial conditions in a context of high indebtedness.

Fifteen DEEs have already had their sovereign debt downgraded in the first five months of 2022.

The Fed’s monetary tightening therefore has a considerable risk of triggering a new chain of financial crises in emerging markets and developing economies.