Michoacán led agricultural exports among all Mexican states in the first quarter of 2022, reported Inegi.

Michoacán’s agricultural exports amounted to 1,384.6 million dollars in the first quarter of this year, which represented a 12.5 percent year-on-year increase. 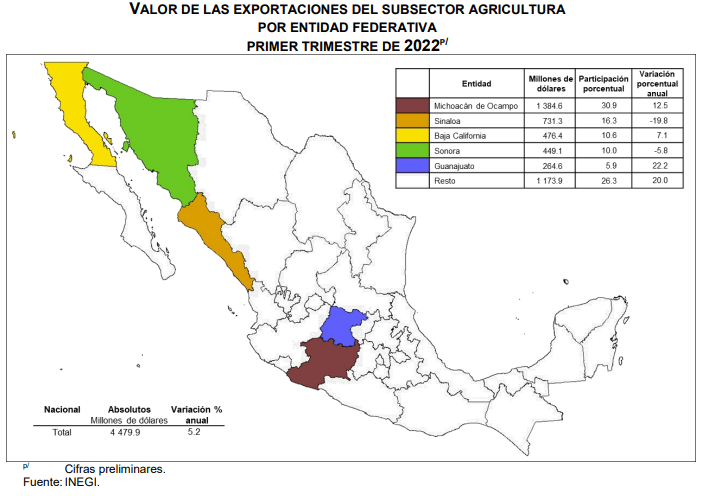 Among the products exported by Michoacán are figs, pineapples, avocados, guava, mangoes, strawberries and other red fruits.

Other leading states in agricultural exports in the first quarter of 2022 were Sinaloa, Baja California, Sonora and Guanajuato.

In the big picture, the geopolitical turmoil stemming from the war in Ukraine has generated a new source of uncertainty for the Mexican economy.

Although trade and financial ties with the countries in conflict are weak, Mexican exports would be indirectly affected, mainly through the U.S. economy, according to the Organization for Economic Cooperation and Development (OECD) outlook.

While domestic consumption will be a key driver of growth, while tourism-related services will gradually recover, exports will continue to benefit from deep integration in value chains.

Furthermore, the OECD expects inflation in Mexico to rise in 2022 and gradually decelerate in 2023, as the impact of rising interest rates takes effect and ample spare capacity limits wage pressures.