With revised figures, Mexico‘s GDP expanded 1% in the first quarter of 2022, compared to the previous quarter, reported the Inegi.

According to Intercam Banco, the data confirms an acceleration of the Mexican economy at the beginning of 2022, which, however, could be short-lived.

At an annual rate, growth stood at 1.8%, slightly above the 1.6% reported in preliminary figures.

At annual rates, all sectors registered growth (primary 2.1%; secondary 3%; tertiary 0.9%) and show that services continue to lag behind in the recovery, led by the industrial sector, which has been driven by the strong expansion of the United States. 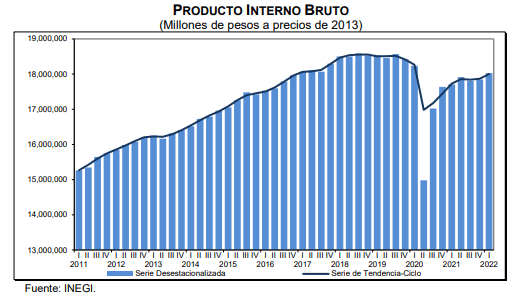 In fact, Intercam Banco highlighted that the trade balance figures confirmed that the positive moment in exports extended to the beginning of the second quarter, after registering an annual growth of 16% in April.

Imports have also continued to show improvement (25.7% per year), although this is mostly due to increases in oil imports (71.1% per year) as a result of rising energy prices globally.

Despite the positive growth figures for the first quarter, from the perspective of Intercam Banco, the outlook looks complicated going forward, with an aggressive monetary normalization in the United States that will slow down growth in the main trading partner and bring negative effects for the growth in the industrial-export sector of Mexico.

In addition, a restrictive monetary policy has been implemented at the national level to contain high inflation, something that will simultaneously limit the expansion of the domestic market.

In fact, the cycle of increases in interest rates has not yet concluded in the country and Jonathan Heath, deputy governor of the Bank of Mexico, assured in recent comments for Bloomberg that increases of between 200 and 300 base points in rates could be needed. of interest to reach levels of 9% or up to 10% in the target interest rate, given the current inflationary environment.

Most economic series are affected by seasonal and calendar factors. Adjusting the data for these factors allows seasonally adjusted figures to be obtained, the analysis of which allows for a better diagnosis of the evolution of the variables.