As of the second quarter of 2022, 22 administrative proceedings have been filed in Mexico in the area of foreign trade, with a total amount of 617.3 million pesos in tax losses.

According to the Ministry of Finance and Public Credit (SHCP), 17 administrative files were submitted to the General Legal Administration (7 for smuggling, 8 for presumption of smuggling, 1 for equivalent smuggling, and 1 for vacating or disappearance of the tax domicile) for analysis and, if applicable, processing as a criminal matter, the amount of the damage to the Treasury amounts to 353.7 million pesos. 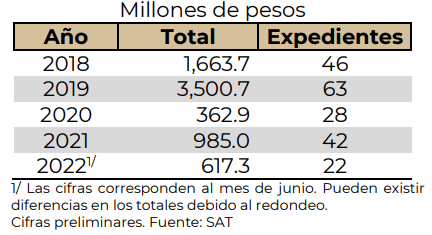 Likewise, 5 files were filed before the Federal Tax Attorney’s Office for tax fraud for an amount of 263.5 million pesos.

From the perspective of the SHCP, the Tax Administration Service (SAT) carries out control processes that seek to reduce illicit trade and position the country on a par with the best international practices.

In this regard, SAT maintains an exchange of information with other tax and customs administrations to jointly combat commercial fraud and inhibit smuggling, money laundering and fraud.

Mexico is among the 15 largest economies in the world and is the second largest in Latin America, after Brazil.

Mexico is also highly dependent on the United States, its largest trading partner and the destination of almost 80% of its exports.

Mexico’s economy is diversified, including high-tech industries, automotive, food, oil production, mining and manufacturing. The country is the seventh largest agricultural power in the world and is among the world’s largest producers of coffee, sugar, corn, oranges, avocados and limes.

In addition, livestock and fishing are important activities in the food industry.

Mexico is the world’s fourth largest beer producer and the largest exporter.

Although the agricultural sector suffers from occasional droughts and other weather-related problems, agriculture grew in 2021, driven mainly by increased food exports to the United States.