Mexico‘s balance of payments current account was moderately in deficit during 2017-2019, but experienced a sizeable surplus in 2020, before returning to a deficit, albeit moderate, in 2021, according to a report by the World Trade Organization (WTO).

That is, it records Mexico’s economic transactions with the rest of the world. 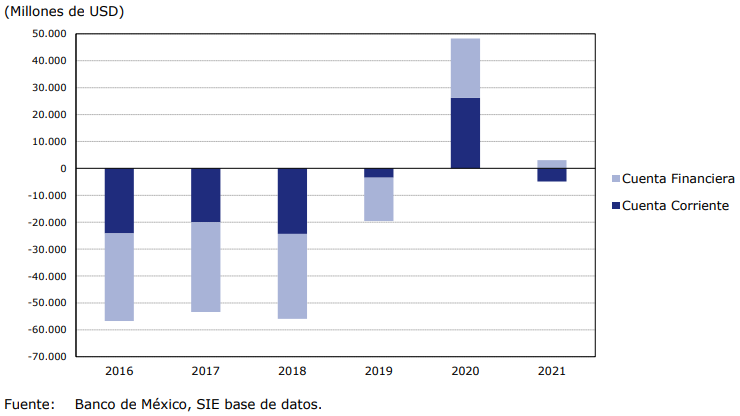 The evolution of Mexico’s financial account allowed for an accumulation of reserves during most of the last five years.

According to WTO data, Mexico’s balance of payments current account deficit exceeded 20 billion each year of the 2016-2018 period, representing between 1.7% and 2.2% of GDP.

The behavior of the oil balance, the services balance and the primary income balance fundamentally explain these deficits.

On the other hand, the surplus in the secondary income account, particularly from remittances, continued to increase.

The Covid-19 pandemic caused a sharp contraction in exports and imports of goods and services in 2020.

However, the drop in imports was larger, resulting in a balance of payments current account surplus of $26.21 billion, or 2.4% of GDP.