Mexico‘s exports grew at an annual rate of 25.4% in September, to 52.338 billion dollars, considering only products, without services.

On the other hand, Mexican merchandise imports amounted to 53,233.4 million dollars, an increase of 20.8% at an annual rate. 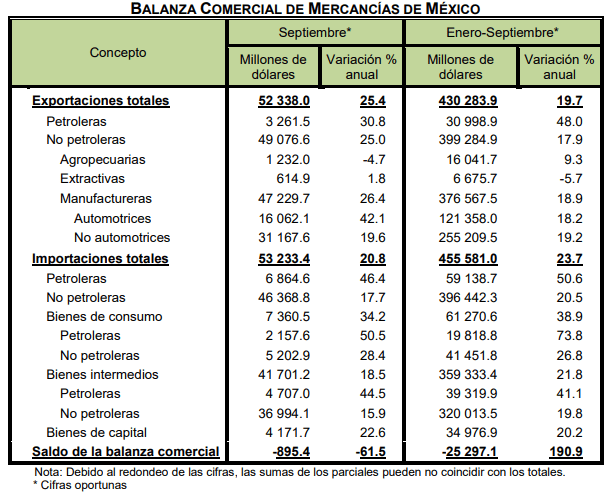 Timely foreign trade information is prepared by the Tax Administration System (SAT), the Ministry of Economy (SE), the Bank of Mexico and the National Institute of Statistics and Geography (Inegi).

The United States Department of Commerce (USDOC) indicates that Mexico is the sixteenth largest economy in the world and has generally enjoyed slow but steady economic growth since the 1990s.

Despite global headwinds related to ongoing supply chain disruptions, inflation, and geopolitical instability, the USDOC projects Mexico’s economy to reach low but steady growth levels in 2022 and beyond, driven largely by external demand.

For U.S. exporters, Mexico’s participation in these international agreements means that the Mexican market is generally open and competitive.

Over the past 20 years, U.S. and Mexican supply chains have become increasingly integrated, and production sharing -with intermediate steps in the creation of a final good taking place on both sides of the border- is now commonplace.