During the 2017-2021 period, Mexico initiated 28 anti-dumping investigations, less than in the 2012-2016 period (November), when 34 investigations had been initiated, according to information from the World Trade Organization (WTO).

As of December 2021, Mexico maintained 78 anti-dumping duties and 2 price undertakings.

These duties mainly affected base metals, which accounted for 66.7 percent of all measures.

Also, most of these measures are imposed on products originating in China (44.9%), followed by the European Union and the United States (in each case, 10.3%) and Ukraine (6.4 percent).

The average duration of an antidumping measure in force in December 2021 was 8 years and 7 months; however, there are 22 measures that have been in force for more than 10 years. 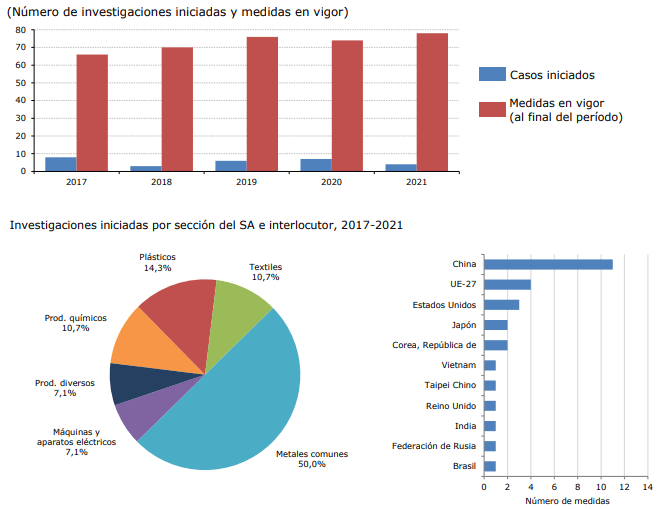 If a Member wants to impose anti-dumping duties, it has to conduct an investigation and follow WTO rules.

The anti-dumping measures permitted by the ADA are the only remedy allowed to counteract injury caused by dumping: provisional measures (Art. 7), price undertakings (Art. 8) and anti-dumping duties (Art. 9).

Other specific anti-dumping measures, such as civil and criminal proceedings and penalties, are inconsistent with GATT Article VI and the ADA.

Requirements for imposition and maintenance of anti-dumping duties

Investigation initiated and conducted in accordance with the ADA.

– Dumping: the introduction of the products of one country into the market of another country at a price below their normal value.

– Causal link between dumping and injury.

A product is being dumped (i.e., introduced into the market of another country at less than its normal value) when its export price when exported from one country to another is less than the comparable price, in the ordinary course of trade, for the like product when destined for consumption in the exporting country.