Mexico‘s exports registered a year-on-year growth of 16% in April, to 47,479.5 million dollars, reported the Inegi.

Consequently, the country’s trade balance had a deficit of 1,884.1 million dollars.

Global economic activity remained resilient in early 2022, with survey data indicating that the Omicron variant of the coronavirus (Covid-19) may have only a short-lived impact on advanced economies. 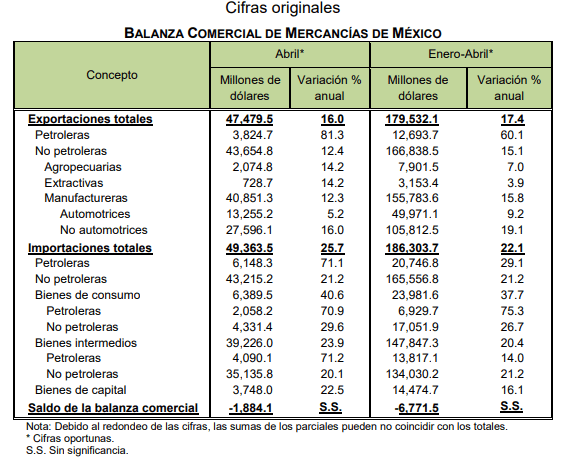 However, according to the European Central Bank, the war between Russia and Ukraine and the new measures related to the pandemic in Asia are expected to weigh on the world economy and cause new shortages of materials and inputs.

The geopolitical situation and the pandemic are also acting as a drag on trade. At the same time, the belated easing of supply chain disruptions and the economic impact of the war are likely to intensify global inflationary pressures.

Within non-oil exports, those directed to the United States advanced 14.8% at the annual rate, while those channeled to the rest of the world did so by 2%.

In contrast, the most relevant annual reductions occurred in exports of cattle (41.5%) and fresh strawberries (9.7 percent).

In turn, extractive exports stood at 729 million dollars, with an annual rise of 14.2 percent.

In the period January-April 2022, the value of total exports totaled 179,532 million dollars, an annual growth of 17.4 percent.

This rate was derived from increases of 15.1% in non-oil exports and 60.1% in oil exports.