Merchandise trade will stand out for its dynamism in Asia among all world regions in 2022 and 2023, according to a report by the World Trade Organization (WTO).

Indeed, Asia’s exports would remain above pre-pandemic levels throughout the forecast period, although setbacks are possible as a result of the recent Covid-19 outbreaks.

In contrast, African exports would remain weak over the next two years, below their 2019 level.

In parallel, exports from other regions would register levels slightly above their pre-pandemic levels.

WTO expects export growth in the Commonwealth of Independent States (CIS) to remain positive, as the Russian Federation was still able to sell fuels at the time of the forecast. 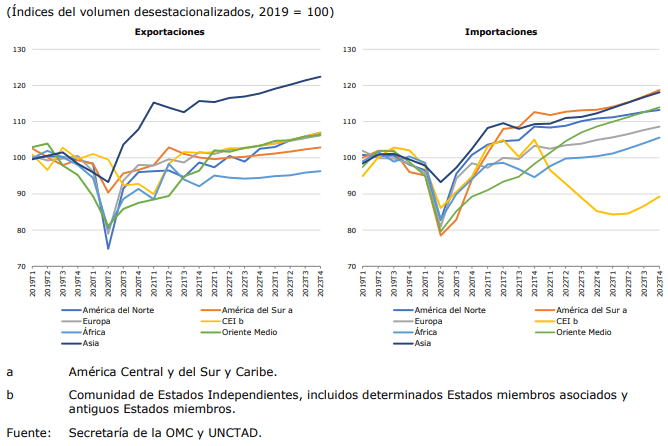 Import volumes would continue to grow until the end of 2023 in all regions except the CIS, where a sharp decline is anticipated as a result of sanctions imposed in the wake of the conflict.

It is difficult for the WTO to accurately measure the magnitude of the decline, as the results will ultimately depend on whether or how the crisis is resolved.

Many countries rely heavily on the Russian Federation and Ukraine for food, fuel and other essential goods.

This is especially true for the Middle East and Africa, where the Russian Federation and Ukraine are major suppliers of wheat and other grains.

At the same time, 100% of the wheat imported into Mongolia, Benin and Kazakhstan came from the Russian Federation.

The Russian Federation and Ukraine are also key suppliers of key production inputs, such as palladium, neon, steel and fertilizers.

Even if countries do not import goods directly from the Russian Federation or Ukraine, many will nonetheless end up paying more when reduced global supply drives up commodity prices.