Megacable and Total Play increased their market share in restricted television services in Mexico in 2020, according to IFT data.

For its part, Megacable (together with MCM) increased its share from 15.9% to 16.6% in the same comparison. 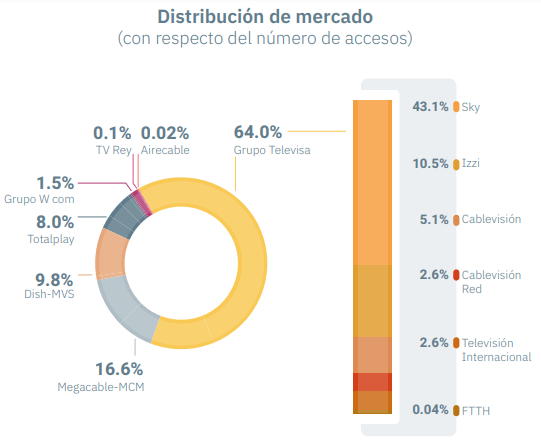 By virtue of the reform to the Political Constitution of the United Mexican States and the “must offer” and “must carry” regulations issued by IFETEL, as of September 10, 2013, the Televisa concessionaires that provide television services broadcast are obliged to allow restricted television concessionaires to retransmit their signal, free of charge and in a non-discriminatory manner, within the same geographic coverage area, in full, simultaneously and without modifications, including advertising, and with the same quality of the signal that is broadcast, except in certain specific cases provided for in the same Telecommunications Reform of June 2013.

For their part, certain restricted television concessionaires benefit from the free use of broadcast signals to retransmit them to their subscribers.

As a result of the foregoing, Televisa has ceased to receive significant income from the marketing of broadcasting rights licenses for broadcast television signals or those whose content is substantially similar to these, which has affected and will continue to affect its results of operation.