Mexico‘s imports and exports of products grew at double-digit year-on-year rates in the first half of 2022, according to Inegi.

On the other hand, imports totaled 293,715 million dollars, which reflected a 25% increase compared to the first half of 2021.

Overall, according to the World Bank, Mexico has diversified away from oil and has developed a stronger productive structure in the private sector. 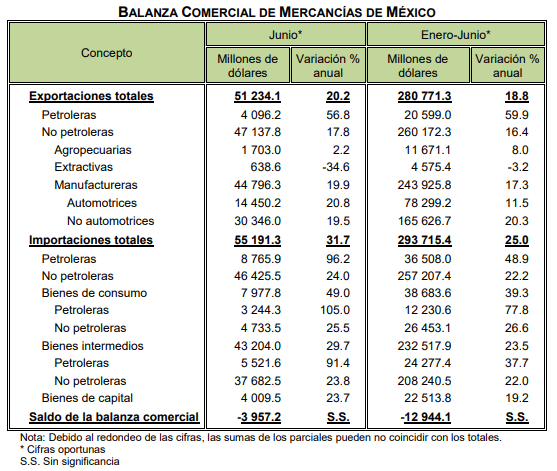 The growth of manufacturing has transformed the export basket, which is no longer dominated by raw materials, especially oil, and has shifted towards manufactured goods.

These include machinery, electronics and transportation vehicles.

In addition, the World Bank reports that Mexico has strengthened its productive capacities in the most complex sectors and is now a competitive exporter of products with a high share of domestic value added.

Mexico’s proximity to the United States (and integration with the U.S. economy through trade) has been a driver of the country’s economic transformation.

Beginning with its entry into the General Agreement on Trade and Tariffs, the precursor to the World Trade Organization (WTO), in 1984, and subsequently through its integration with North America through the North American Free Trade Agreement (NAFTA) in 1994, Mexico experienced a process of deep integration with the United States in terms of economic activity.

A gravity model would have predicted export flows from Mexico to the United States equivalent to 33.3% (using 2013 trade data), while actual flows were equivalent to 71.5%, more than 2.1 times higher than the predicted level of integration, as exposed by the World Bank.

By type of good, there were monthly increases of 12.42% in imports of consumer goods and 5.53% in intermediate use goods. A decrease of 1.03% was observed in imports of capital goods.