Imports and exports of goods from Mexico grew at double-digit year-on-year rates in March, the Inegi reported on Wednesday.

On the contrary, imports from Mexico were 51,801.7 million dollars, which represented a growth of 12.7 percent.

Thus, Mexico obtained a surplus of 198.7 million dollars in its trade balance. 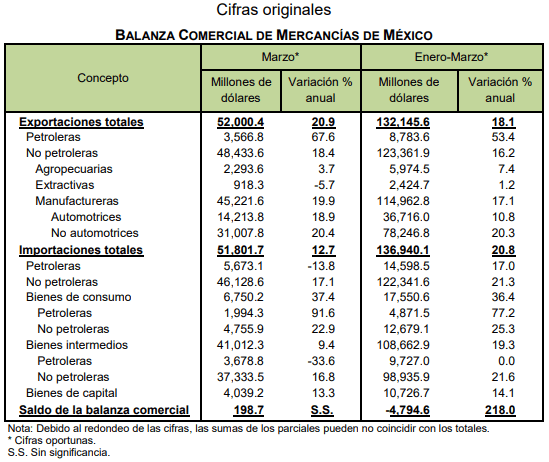 The most important annual expansions were observed in exports of steel products (43.6%), food, beverages and tobacco (27.4%), machinery and special equipment for various industries (22.6%), automotive products (18.9% ) and electrical and electronic equipment and appliances (14.8 percent).

Meanwhile, the annual advance of exports of automotive products derived from increases of 16.1% in sales to the United States and 34.7% in those directed to other markets.

The value of agricultural and fishery exports in the third month of the current year was 2,294 million dollars, an annual increase of 3.7 percent.

In contrast, the most relevant annual reductions occurred in exports of pepper (30.3%) and cattle (27.9 percent).