Grupo Mexico maintained its position as the largest copper producer in Mexico, totaling 559,833 tons in 2021.

With this, the company recorded a coverage of 76.3% of domestic copper production in 2021. 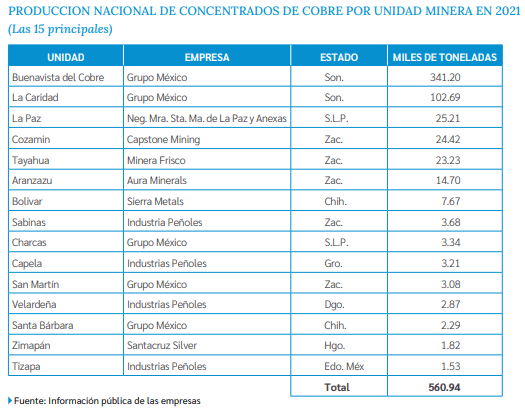 This was followed by Minera Frisco, Negociación Minera Santa María de la Paz y Anexas, Capstone Mining and Aura Minerals, according to data from the Mining Chamber of Mexico (Camimex).

From another angle, Grupo México owns five of the main copper concentrate producing mining units in the country.

What is a copper concentrate? It is a product obtained through physical or physical-chemical processes whose copper grade is higher than that of the original raw material. The most common process to obtain copper concentrates is flotation.

Other leading companies in Mexico are: Sierra Metals, Industria Peñoles and Santacruz Silver.

Copper is a metal with inherent characteristics of excellent electrical conductivity, heat transfer and corrosion resistance.

Copper is traded mainly on the London Metal Exchange (LME), the New York Commodity Exchange and the Shanghai Futures Exchange.

The price of copper traded on these exchanges is influenced by numerous factors, including: the global balance of copper supply and demand; global economic growth rates, including China, which has become the world’s largest consumer of refined copper; speculative investment positions in copper and copper futures; the availability and cost of substitute materials; and exchange rate fluctuations, including the relative strength of the U.S. dollar.