The global mining industry experienced a growth of 3.2% in 2021, according to the physical production volume index, practically recovering the drop experienced the previous year. 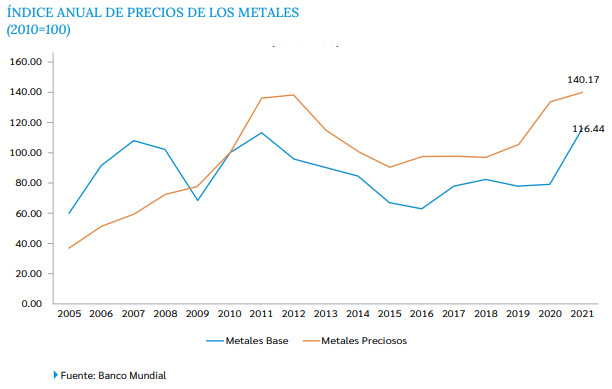 At the beginning of the pandemic and in the first months, the most significant increase was in precious metals, due to the levels of uncertainty generated at a global level.

After the announcement of the generation of the first vaccines, the largest increase occurred in base metals, given the supply problems that developed as a result of temporary closures and difficulties in supply chains.

In the second half of the year, the prices of both groups of minerals tended to stabilize, reflecting the slowdown in the main economies of the world, as a result of supply shortages and inflationary pressures, and in the case of China, also due to lower investments in its real estate sector and the power cuts and rationing that affected manufacturing production in general.

According to the Global Exploration Trends report, published by S&P Global Market Intelligence, global investment in mining exploration recovered in 2021, with a 35% annual increase, stimulated by the global economic recovery, the increase in metal and support prices, as well as favorable conditions in certain territories, particularly in advanced countries.