Exports in the Brazilian poultry industry grew rapidly between 2001 and 2021 and its world leadership will be maintained in the coming years, according to forecasts published in an analysis by the United States Department of Agriculture (USDA).

The country regained the title of the world’s largest poultry exporter in 2007. 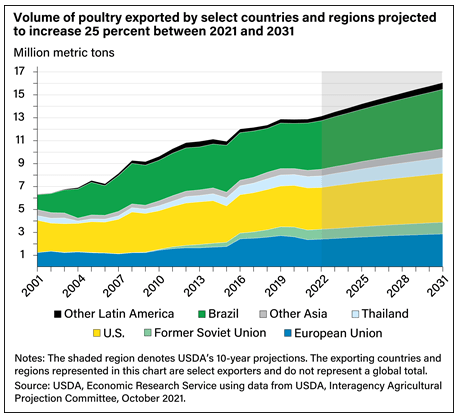 By comparison, the United States sent 1% of its poultry exports to China during that time.

Brazil’s exports have also increased to markets in Europe and the Middle East.

According to the same analysis, Brazil is forecast to remain the world’s leading poultry exporter, with an increase of 5.2 million metric tons by 2031.

The three largest exporters (by volume) are Brazil, the United States and the European Union (EU). Together, they accounted for 71% of global poultry exports in 2021, a share that is expected to remain virtually stable in 2031.

The other four major exporting regions, “Others in Latin America,” “Others in Asia,” Thailand, and the former Soviet Union, accounted for 19% of global poultry exports in 2021. Their share is expected to increase slightly in 2031.

Like Brazil, the EU poultry export market grew between 2001 and 2021, although the region remains the world’s third largest exporter.

This growth is mainly due to import demand in sub-Saharan African markets such as Ghana and the Democratic Republic of Congo, as well as Hong Kong and Saudi Arabia.

Despite losing some export market share to Brazil, the United States remains the second largest exporter of poultry and is expected to remain so for the next 10 years.

However, U.S. exports to Latin American countries, particularly Cuba, Guatemala and Colombia, have expanded over the past decade.

Exports to South Africa also increased as trade restrictions have eased since 2015. U.S. exports of chicken meat are primarily in the form of dark meat, specifically leg quarters (the uncut leg and thigh).