The Coca-Cola Company listed its progress in ESG criteria, which refer to environmental, social and corporate governance factors that are taken into account when investing in a company.

Among the achievements highlighted by the company are: 167% of the water used in its finished beverages returned to nature and communities by 2021.

It also mentioned the following: 90% recyclable packaging; 61% packaging collection; and 13.6% rPET in its packaging.

In addition, The Coca-Cola Company said it has 38.7% women in senior leadership positions.

Although their origin dates back several decades, ESG criteria in recent years have become the benchmark for socially responsible investment (SRI). 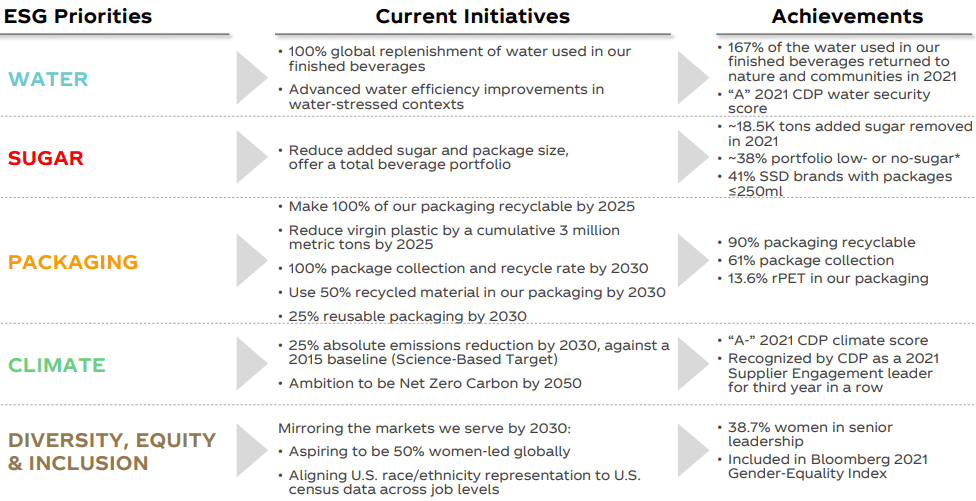 Among the risks related to consumer demand for its products are obesity and other health-related concerns.

There is growing concern among consumers, public health professionals and government agencies about the health problems associated with obesity.

In addition, there are also additional government regulations relating to the advertising, marketing, labeling, packaging or sale of its sugar-sweetened beverages; and negative publicity resulting from actual or threatened legal action against the Company itself or other companies in the industry in connection with the marketing, labeling or sale of sugar-sweetened beverages.

All of these risks may reduce demand for or increase the cost of your sugar-sweetened beverages, which could adversely affect your profitability.

Concentrate sales volume growth is calculated based on the quantity sold during the reporting periods, which is affected by the number of days.

In contrast, unit case volume growth is calculated based on average daily sales, which is not affected by the number of days in the reporting periods. The first quarter of 2022 had one less day compared to the first quarter of 2021, which contributed to the differences between the concentrate sales volume and unit case volume growth rates on a consolidated basis and for the individual operating segments for the six months ended July 1, 2022.

In addition, for the Europe, Middle East and Africa and Latin America operating segments, the differences between concentrate sales volume and unit case volume growth rates during the three months ended July 1, 2022 were impacted by the timing of concentrate shipments in the first quarter of 2022 as certain bottlers adjusted inventory levels in an effort to manage short-term supply chain disruptions.

The difference between concentrate sales volume and unit case volume growth rates during the three months ended July 1, 2022 for the Asia Pacific operating segment was due in part to the timing of concentrate shipments in China as bottlers prepared for business recovery related to the anticipated decline in closures associated with the Covid-19 resurgence.

The company expects the differences between concentrate sales volume and unit case volume growth rates to decline over the remainder of the year.