The demand for IoT devices has maintained an upward trend and its dynamic rise is expected to continue in projections through 2026.

According to Hong Kong-based Tuya Inc, growing end-user demand for smart devices, driven by increased affordability and improved user experiences, is driving brands to adopt IoT in their products and developers to create a new generation of innovative user-centric software applications, which in turn will lead to more use cases and increased demand for IoT.

This virtuous circle is driving significant growth in the number of IoT devices. 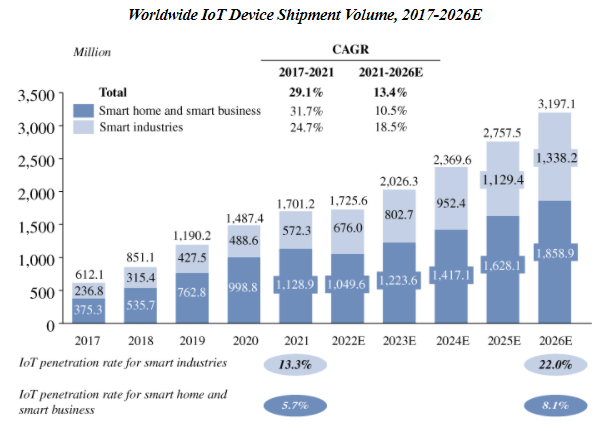 With its IoT PaaS, the company enables brands, OEMs and developers to develop, launch, manage and monetize smart devices and services. Its Industry SaaS offering enables enterprises to deploy, connect and manage a large number and different types of smart devices

The average penetration rate of IoT-enabled devices among total incremental device shipments in home and enterprise operations was 5.7% in 2021 and is expected to grow to 8.1% in 2026.

Meanwhile, Tuya referred that the average penetration rate of IoT-enabled devices among total device shipments related to industrial operations was 13.3% in 2021 and is expected to grow to 22.0% in 2026.

Previous forecasts for smart device shipments and the average penetration rate of IoT-enabled devices have taken into account the impact of the Russia–Ukraine war in 2022, which since its inception has had a strong and lasting influence on the world’s total economic output.

Most countries have encountered rising inflation, which has weakened consumer spending on smart devices.