Container shipping has shown a new trend towards greater corporate concentration since 2010, describes a report by the Economic Commission for Latin America and the Caribbean (ECLAC).

Even if one adopts a purely legalistic definition of concentration (mergers or acquisitions leading to common ownership), out of 100 registered consortia worldwide, the first 9 account for 82.6% of total global shipping capacity measured in TEU (20-foot equivalent unit).

In both the United States and Europe, the shipping industry is predominantly organized through business cooperation agreements. 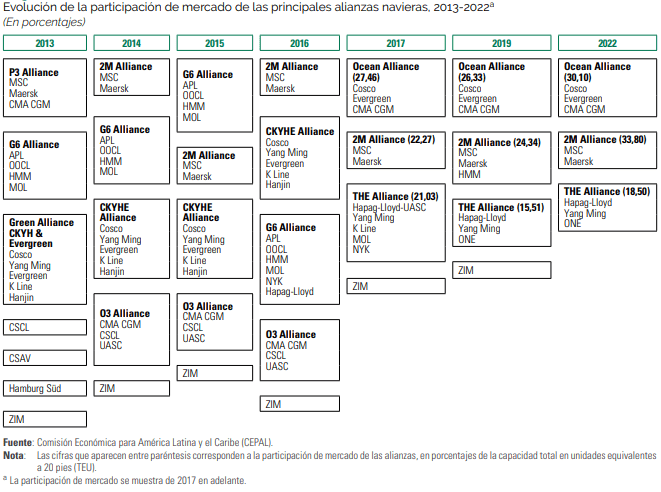 This is a gradual process initiated in 1995 that resulted in the nine leading companies now forming three main shipping alliances, whose agreements are based on sharing commercial information, vessels and holds, although they do not fix prices in common and, theoretically, compete with each other.

Thus, it was a process driven by a general strategy that could be described as market capture through the construction of larger capacity vessels.

It seems to be proven that the corporate objective of lower costs and higher profitability was put forward as a necessary condition for obtaining an increasing market share.

ECLAC concludes that the crisis caused by the Covid-19 pandemic and the disruption of supply chains on the structure of the shipping market exacerbated the trend towards greater concentration.

The gap between the leading and the twentieth-ranked shipping line had grown in the same period from 3.2 to 4.3 million TEUs.

Simultaneously, during the pandemic crisis, and mainly due to the historical increase in maritime freight rates, the sector’s profits expanded notably, especially in the case of the leading shipping lines.

If we take a list of 13 shipping companies, we can see that their shares had an average return of 135% in the second quarter of 2021.8

Computed up to the first half of July 2021, the gains reached even higher figures and averaged 187 percent.