Of the total net energy generated by the Federal Electricity Commission (CFE) of Mexico in 2021, that corresponding to clean energy was 23 percent.

This includes hydroelectric, nuclear, geothermal, wind and photovoltaic generation and was one percentage point higher than in the previous year.

Likewise, 2.02% was generated with coal and 10.3% with conventional steam.

However, of the generation of CFE plants (without considering IPPs), the percentage of generation with clean energy reaches a value of 39 percent.

In total, these plants contain 969 active units distributed throughout the country

While the company maintains exclusivity in transmission activities in Mexico, the CFE’s transmission network considers voltage levels between 69 and 400 kV.

In addition, the transmission requires the transformation process, for which electrical substations are used to change the properties of the energy and facilitate its transport. 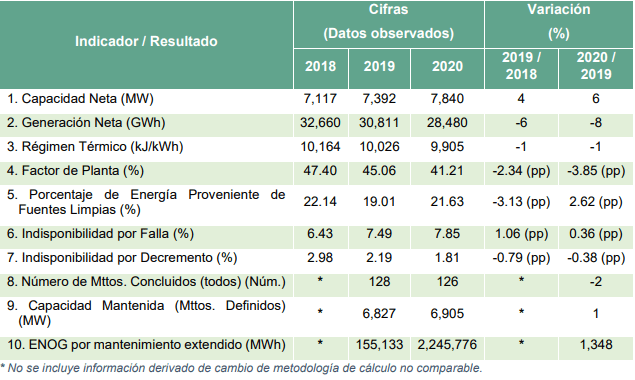 Pursuant to the Electricity Industry Law (LIE), there are four regulated tariffs within the electricity sector and the Energy Regulatory Commission (CRE) is the authority responsible for determining and publishing the calculation and adjustment methodology.

Regarding the energy transmission service, in terms of the LIE, the methodology for determining transmission rates must be based on the recognition and recovery of efficient operation, maintenance, financial and administration costs, as well as considering the depreciation, taxes and a reasonable profit.

In September 2015, the CRE issued the resolution that determined the applicable rules for calculating the transmission rate during an initial period of three years (2016-2018).

The distribution networks have an expansive nature with the capacity to provide electricity to almost the entire population of the country.

Like transmission, energy distribution requires a transformation process, for which electrical substations are used to change the properties of energy and facilitate its transport.

As a strategic activity of the Mexican State, the distribution service is also regulated and in the same way its rates are determined by the CRE.