Greater per capita availability of fresh citrus in the United States may suggest increased purchases during the pandemic, the USDA noted.

What does the data say? The total availability of fresh citrus fruits (oranges, lemons, limes, grapefruits and mandarins), which is an indicator of consumption, reached a record 8,861 million pounds in the 2019-20 cycle, after which it only decreased slightly to 8,856 million pounds (still above pre-pandemic levels).

On the one hand, imports accounted for a record 36% of availability during the 2020/21 season, and lime imports alone accounted for almost half (48%) of all fresh citrus imports, followed by mandarins. (45%) and oranges (13 percent).

On a related note, orange juice purchases temporarily increased during the first months of the coronavirus pandemic (in the United States during the 2019/20 marketing season, with some suggesting that the pandemic reinvigorated consumer interest in the orange juice for consumption, due to its perceived immunostimulating properties.

Similar concerns and perceptions may be driving consumer purchasing decisions regarding fresh citrus. 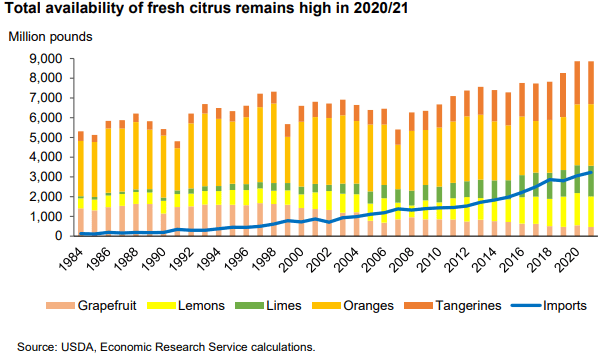 In particular, Florida produced 81% of all US oranges for processing, while California and Texas produced the remainder.

Florida and Texas had smaller orange crops for the processing market in 2020/21 compared to 2019/20.

U.S. orange juice imports in 2020/21 (October through July) were up by 104 million gallons (30
percent) from the same period last season.

This increase in orange juice imports from 2019/20 may be due to slightly lower-than-average beginning stocks (417 million gallons), but also due to larger crops in Brazil and Mexico compared with last year.