In recent years, the Chinese government has de-emphasized the importance of the GDP target, choosing not to set a numerical growth target for the 14th Five-Year Plan (2021-2025).

For now, the Chinese government announced only a conservative GDP target of “at least 6%” for 2021.

According to Coface, China‘s slowdown sharpened in the fourth quarter of 2021, with an annual growth rate of 4.0%, the slowest pace since the peak of the pandemic in 2020.

China’s economic recovery has been affected by the slowdown in the real estate market, the continuation of the “zero-COVID” strategy, which has weighed on household spending, weak investment growth and energy shortages. In 2021, Chinese GDP grew 8.1 percent. 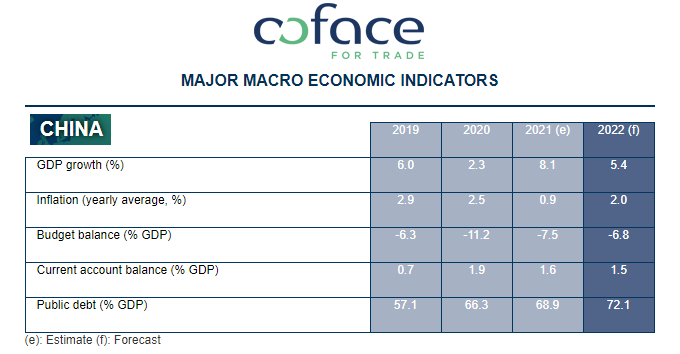 Going forward, Coface expects China’s GDP growth to moderate from its 2021 recovery and return to its pre-Covid-19 trend in 2022, as the focus remains on economic transition, but also emphasizes macroeconomic stability.

However, this credit insurer added, efforts to maintain the balance between multiple objectives will be weak.

But sequential (seasonally adjusted) growth rates remained subdued in the first nine months of 2021 (0.2 to 1.2% qoq) and were notably weaker than the long-term average of 1.8% qoq.

In fact, domestic demand remains subdued. Retail sales increased 3.9% year-on-year in November 2021, well below its pre-pandemic growth of about 8%, suggesting an impact from prolonged and ad hoc mobility restrictions.

Meanwhile, fixed asset investments (FAI) rose 5.2% in the January-November 2021 period linked to slower growth in real estate development (about a quarter of FAI) at 6%. , and an almost flat increase in infrastructure investments (0.5 percent).

However, from Coface’s angle, the growth of fixed investment, particularly in infrastructure spending at the local and regional level, may accelerate in 2022 as the authorities indicated greater fiscal support, highlighting the importance of maintaining a favorable environment. stable and healthy economy ahead of the 20th National Party Congress (NPC).