Property sales slowed sharply in China, while home prices and construction activity also slowed, according to a Federal Reserve report.

Customers typically make payments to construction companies before project completion, and the adverse dynamic could be amplified, according to the Federal Reserve, if buyers lose confidence in developers’ ability to complete housing units.

There have already been defaults in China by a number of property developers and severe liquidity shortages for others with respect to domestic and offshore financing. 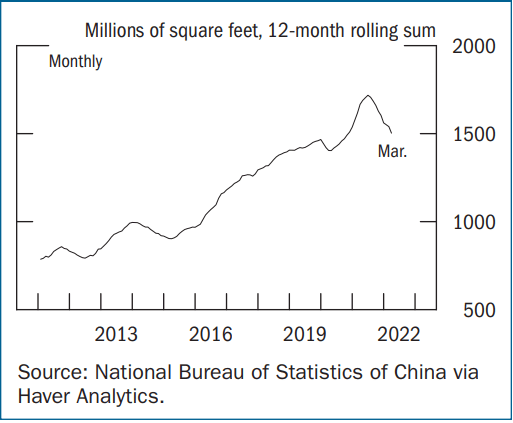 Although the Chinese government has managed to contain its effects so far, a significant worsening of the slowdown in real estate markets could affect China’s financial system.

Chinese banks are also exposed to property developers indirectly through bank-sponsored wealth management products that are sold to retail investors.

Local governments are exposed to China’s real estate market because they generate a significant portion of their tax revenue from land sales and are also highly leveraged.

In December, the Chinese national government announced relaxed restrictions on bond financing by local governments in the first quarter of 2022, which should partially ease short-term pressures and provide financing for infrastructure investment.

Local government issuance appears to have been robust in the first quarter, and fixed asset investment growth in China accelerated earlier in the year, reflecting the large initial burden of fiscal stimulus this year.

So far, spillover effects in the United States have been limited in scope.

Over the past few decades, expansionary policies in China have helped sustain rapid economic growth, which has outpaced that of most other countries.

China’s share of world GDP has reached about 17%. Credit to Chinese companies has risen even faster, supporting GDP growth, but the resulting leverage in the corporate sector makes it increasingly vulnerable to shocks.

Non-financial trade credit in China has reached about 160% of GDP, a level that is much higher than in most other emerging market economies.