Cemex reported that the volume of its cement sales in the United States increased 9% in the first quarter of 2022 at a year-on-year rate.

But in Mexico this same indicator contracted 8% year on year.

In Mexico, measured in value, net sales increased 5% during the first quarter of 2022, driven, according to the company, by a successful pricing strategy. 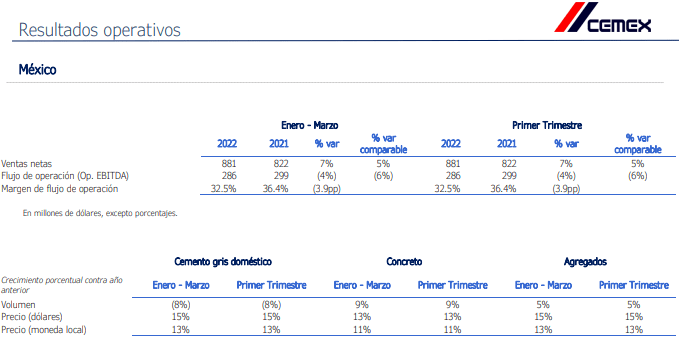 Above all, demand for Cemex products was driven by activity in the industrial and commercial sectors, and formal housing.

The decrease in bagged cement resulted from a difficult comparative basis. As the company announced a second price increase for bagged cement, effective April 1, 2022, its pricing strategy and cost-cutting initiatives should offset inflationary challenges in the country.

In the United States, the company’s operations continued to benefit from a strong demand for all products, in a domestic market that is at the top of its production capacity.

The strong performance in volumes and the improvement in prices of its three main products resulted in a solid growth in sales during the quarter.

While EBITDA margin decreased compared to the previous year due to energy costs, imports, and logistics, the sequential margin improved almost one percentage point.

During January, Cemex successfully implemented price increases in markets that constitute 40% of its cement volumes in the United States, resulting in sequential price increases of between 3 and 4 percent.