The strength of Canada‘s recovery has been especially evident in the labor market, according to the Department of Finance.

Canada has experienced one of the fastest employment recoveries in the G7, in large part due to the extensive pandemic support the federal government provided to workers and businesses.

To highlight: some 400,000 more Canadians are working today than before the pandemic, and the unemployment rate of 5.2% in September is near an all-time low. 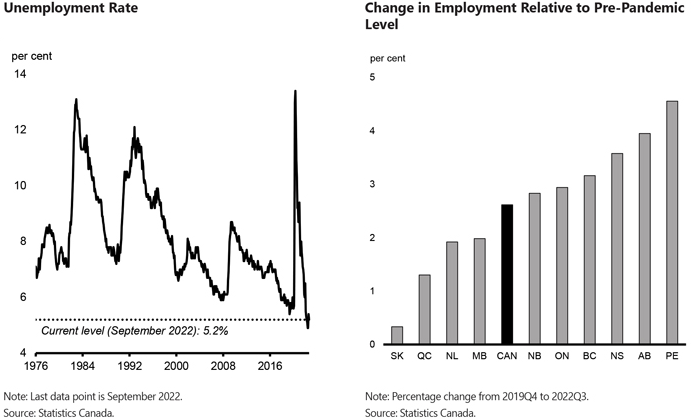 These strong conditions are evident across the country, with employment above pre-pandemic levels in all provinces.

Compared to the United States, the economy with which Canada is most closely linked, labor force participation is particularly strong.

About 79% of working-age Canadians participated in the labor market in September, compared with 74% in the United States.

However, employers have had difficulty filling available positions, in part due to a shortage of immigration early in the pandemic.

According to the Canadian government, employers were looking to fill more than 1 million jobs in the second quarter of 2022, a record number, although the most current data suggest some easing in labor demand.

This tightness in the labor market has also resulted in solid wage growth, which has helped to mitigate the impact of the rising cost of living.

In terms of migration flows, the strong rebound in immigration has contributed to the recovery in population and labor force growth.

Canada has experienced the fastest population growth among the G7 countries in recent years.

After a sharp decline at the beginning of the pandemic, the number of new permanent residents in Canada increased by about 275,000 so far this year, and the government is well on track to reach its 2022 immigration target.

In addition, the number of temporary foreign students and workers also increased significantly.