The Spanish company Construcciones y Auxiliar de Ferrocarriles (CAF) reached 38 projects that, in the manufacturing or delivery phase, were active in 2021.

CAF provides services to the most diverse variety of clients throughout the world: from municipalities and regional or national administrations of a public or private nature, to other railway manufacturers and private companies that operate or maintain systems.

Likewise, the company has production plants in countries such as Spain, Poland, the United Kingdom, France, the United States, Mexico and Brazil. 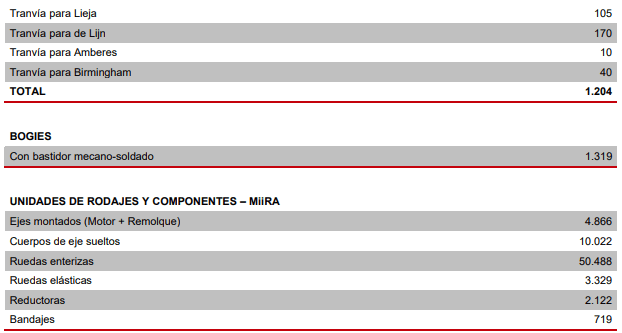 It also has offices and maintenance centers for rail vehicle fleets in more than 20 countries on five continents.

Other projects, already started in previous years, have continued with deliveries throughout 2021, such as the additional cars for the Northern Ireland operator NIR with the delivery of 6 3-car UTs, the trains for the British operator West Midlands with the delivery of 5 2-car units and 7 4-car units, as well as 21 3-car trains and 21 more 4-car trains for the Dutch operator Nederlandse Spoorwegen, the 10 Metro units of the 22-train contract signed with the city of Brussels and 10 compositions of 6 cars for the Naples metro.

Within this list, there are also 15 LRVs (Light Rail Vehicles) of the total of 30 units of the contract signed with Manila, 5 trains of the 12 contracted by the German operator Schönbuchbahn, as well as a significant number of trams, among which are the 5 trams to Luxembourg, 34 trams to Amsterdam, 34 trams to De Lijn, 15 of the 20 trams contracted by the city of Liège and 8 of the 21 trams to Birmingham.

The first 8 trams for the state of Maryland, the first 3 trains for the Amsterdam metro, as well as the 8 2-car compositions and the 2 3-car compositions with which the contract begins have also left the manufacturing plants. signed with the British operator Wales and Borders, 4 of the 5 trams of the extension of the contract signed for the Dutch city of Utrecht, the first tram for Parramatta and the first 2 trams for Antwerp.