Merchandise trade between the UK and the European Union only returned to pre-Brexit levels in February 2022.

In the case of European countries, the end of the transitional period of Brexit in January 2021, which meant the exit of the United Kingdom from the single European market and the subsequent entry into force of the Trade and Cooperation Agreement with the European Union, there was a negative impact on exports from the euro area.

Thus, the end of the transition period coincided with a marked reduction in the volume of merchandise trade between the United Kingdom and the European Union.

According to the Bank of Spain, this limited recovery is explained in part by the fact that European companies with greater exposure to the United Kingdom seem to have taken advantage of the transition period to gradually transfer their commercial activities to other countries of the European Union, as suggested by the available evidence for Spain. 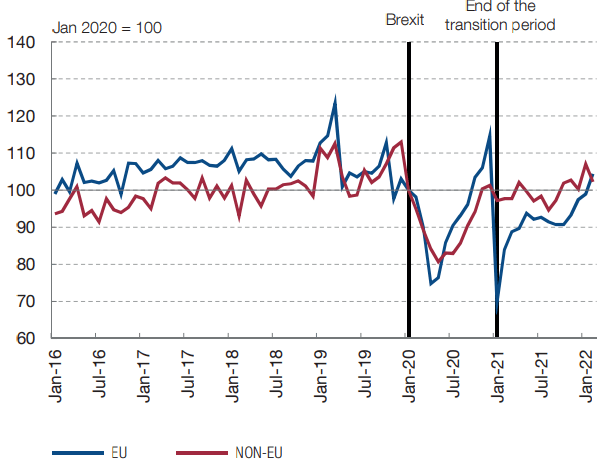 The dynamism of Spain’s goods exports was hampered throughout 2021 by interruptions in the global production chain.

Furthermore, in early 2021, Brexit had an adverse impact on goods exports, albeit temporary and limited.

In fact, already after the Brexit referendum, Spanish trade began to be diverted towards other European markets due to the uncertainty surrounding the negotiations on the new framework of bilateral relations between the European Union and the United Kingdom.

In recent decades, the integration of European economies (including the Spanish economy) into global production chains has improved resource allocation and economic efficiency but, at the same time, has increased the European Union’s exposure to tensions in Supply Chain.

The globalization of international trade and financial flows in recent decades has generally taken place in a geopolitical context conducive to the growth of multilateralism.

More recently, however, a number of geopolitical events, such as the Russian invasion of Ukraine, Brexit, and the Sino-US trade war, have fundamentally called multilateralism into question and highlighted the significant risks to which the European economy is exposed in the global environment. world.